KGO
By Chris Nguyen
SUNNYVALE, Calif. (KGO) -- Hundreds of law enforcement community members gathered Tuesday morning to pay tribute to a Sunnyvale police K-9 who was killed in the line of duty.

Jax, a K-9 for the city's department of public safety since 2015, was fatally stabbed at the Encasa apartment complex on East Weddell Avenue on Halloween.

Officers had responded to a domestic violence call and were attempting to negotiate with the suspect, Jesus Birelas-Contreras, when they say he stabbed the K-9 during an altercation. The public safety department says the 25-year-old later threw a knife at officers, at which point a lieutenant opened fire and struck the suspect.

Birelas-Contreras was transported to a nearby hospital where he died from his injuries.

At Tuesday's memorial for the fallen K-9, ABC7 News spoke exclusively to Officer Stephen Eckford, Jax's handler for the past two years. Eckford described how Jax was tough and serious as a police dog, but how he could also be warm and friendly in non-tense situations.

ABC7 News also spoke with two of the medical professionals at the Adobe Animal Hospital who treated Jax immediately after the stabbing, but were ultimately unable to save him. They were touched by the department's invitation to attend his memorial.

The four-year-old German Shepherd was born in the Czech Republic. In addition to patrol work, he was cross-trained in narcotics detection. Department officials say he was also known for his great leaping ability. 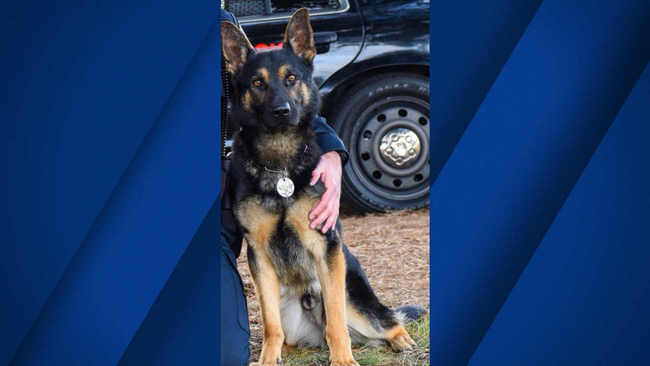