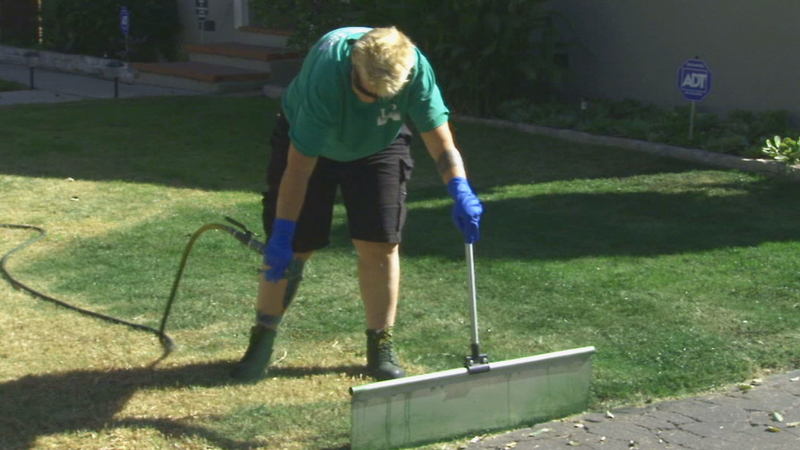 His vision was for a lush lawn, Paul Katz moved into his Valley Glen neighborhood five months ago.

He had hoped that spring showers would bring forth a hardy crop of grass. Instead, with the drought, the lawn bit the dust and he turned on the water hose.

His decision was to go green -- artificially.

"I have kind of a secret sauce that I've added to my formula so that it does look really, really natural," said Kerri McCoy, owner of Lawn Paint Pros.

McCoy has been a professional lawn painter for four years.

"It is a non-toxic, vegetable-based turf dye," said McCoy.

She says since last spring her business has been spraying up a storm.

"Instead of one call a week, it started being two, three, four, calls a day," said McCoy.

Painting lawns first became popular during the housing bust. Realtors wanted curb appeal for foreclosed homes where the water had been shut off.

Some homeowners are resorting to synthetic grass, which is pricey, but more permanent.

Native vegetation is another option. Paul Katz and his neighbor paid $300 for a drought-resistant garden along the driveway.

"Even the city will give you a rebate up to $3 a square foot, so I signed up for that, but it's a three- to six-month waiting list," said Katz.

So he's getting a color job while he waits.

It's paint -- won't it come off? It takes about an hour to dry, but after that, McCoy says, it's good for at least three months.

"My neighbors will all probably be knocking on my door in the next day or two when they see what has happened," said Katz.

Katz, who was worried about his lawn looking fake, says he's satisfied with the outcome. More important he says will be the look of his water bill: fewer greenbacks to pay each month, more for home-beautification.