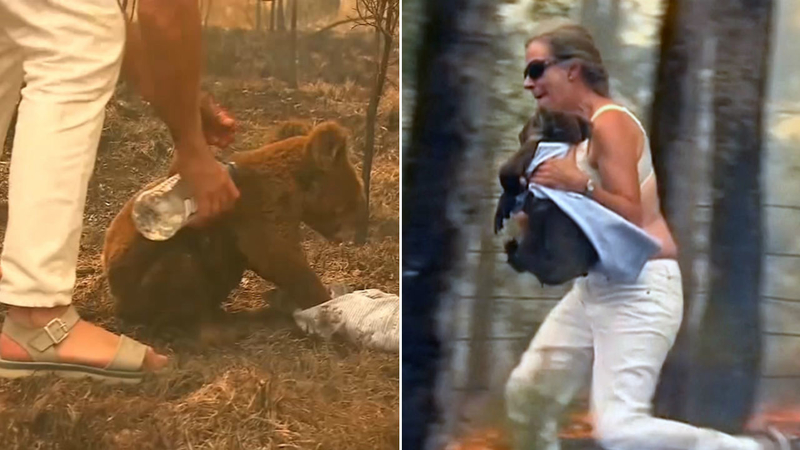 Koala dies one week after video of rescue from Australia wildfire

SYDNEY -- A koala whose rescue from bushfires in Australia went viral last week had to be put down due to the severity of his burn injuries, ABC News reports.

The koala, named Lewis, was struggling to escape the fire when Toni Doherty saw him from her car. She took the shirt off her back and used it to bundle him up and take him to safety.

Ellenborough Lewis, the koala who shot to internet fame after being rescued last week from massive wildfires that engulfed the Australian state of New South Wales, has died.

Doherty told local broadcaster Network Nine that it was "just natural instinct" for her to rush to the koala's aid, wrapping the animal in her shirt and pouring water over it to help soothe his burns.

Unfortunately his injuries were too severe and he had to be euthanized, according to a Facebook post by The Port Macquarie Koala Hospital on Monday.

"We placed him under general anesthesia this morning to assess his burns injuries and change the bandages," the hospital said in their Facebook post. "We recently posted that "burns injuries can get worse before they get better". In Ellenborough Lewis's case, the burns did get worse, and unfortunately would not have gotten better. The Koala Hospital's number one goal is animal welfare, so it was on those grounds that this decision was made."

The hospital is full of injured koalas and continues to rescue and treat the animals after the fires broke out in late October.

The fate of Australia's koala population is hanging in the balance as deadly fires continue to rage across the country.