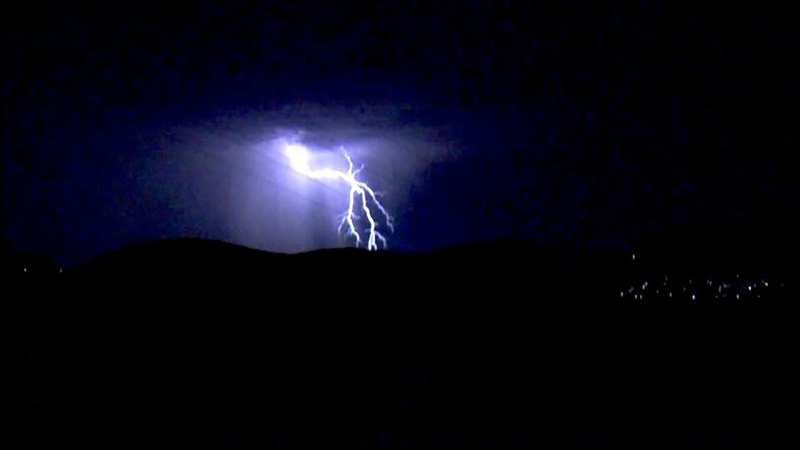 For the first time in months, the Bay Area experienced thunder, lightning, and even rain. While the skies put on quite a show, many firefighters were on edge for the potential of fires.

The lightning strikes made their final push during the 6 a.m. hour as the system moved east out of the region.

The scattered rain was a nice surprise to many in the area.

"We're in a drought and we really need it," explained Melinda Blancarte, who lives in Mill Valley.

"Rain is awesome and it's good for the fires," said Belluomini.

Which is usually true, except this rain is not nearly enough to put a dent in the dry conditions... and it comes with lightning.

"The challenge for lightning is that it happens in remote locations with poor access and that allows those fires to get big before we can get stuff on them," said Battalion Chief, Jeremy Pierce, who says Marin County Fire is monitoring the lightning by the minute.

"Typically we'll get wind with those lightning strikes and then we can have an abnormal amount of starts in one location which can tax our firefighters."
Which makes it all the more important for residents to watch out and even help out.

If there's a serious fire, Woody Baker-Cohn, with Marin County's Emergency Operations Center, hopes people will display "evacuation" signs on their homes to help first responders. Fire stations and the Marin County Sheriffs Office has been handing the signs out to Marin residents.

"The idea is when we're going around trying to quickly evacuate people, if somebody has an evacuated sign, we know they've already evacuated and we don't have to spend time banging on the doors trying to make sure nobody is home."

"I was pretty proud about that," said McCann, who added, "It was a great dress rehearsal. We always talk about an emergency but to actually have the warning, and people found out about the warning, and then they evacuated, it was heartwarming. I knew they were safe."