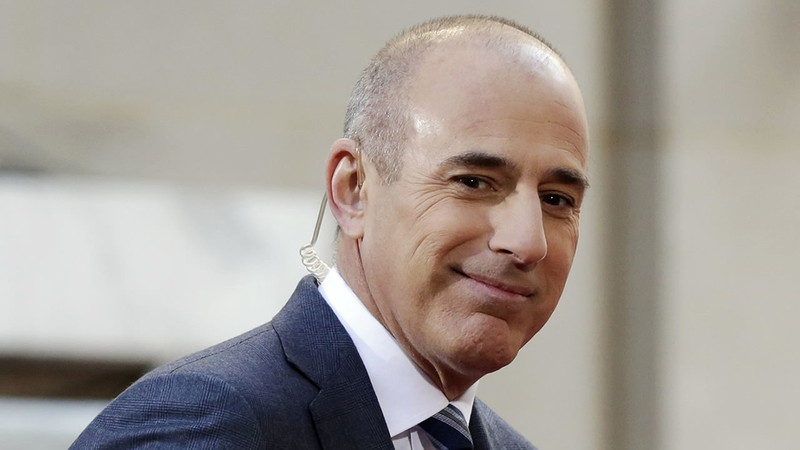 Accusations of sexual harassment against people in powerful positions are not new.

In July of 2016, Roger Ailes resigned as president of Fox News after several female anchors accused him of sexual harassment. In April of this year, Fox News fired television host Bill O'Reilly once it was revealed he had settled several sexual harassment lawsuits.

Since October, when Harvey Weinstein was ousted from the film studio he co-founded amid allegations he sexually assaulted or raped more than 80 women, accusations against dozens of other high-profile public figures have followed.

It has been called the Weinstein effect.

This week alone, Matt Lauer, Russell Simmons and Garrison Keillor were fired after reports of sexual misconduct and inappropriate behavior surfaced. The seeming flood of allegations reignited the conversation around accusations of past improprieties, particularly that of President Donald Trump and former president Bill Clinton.

Here's a rundown of notable figures accused of harassment after Weinstein.

Russell Simmons
Founder, Def Jam Recordings (Resigned Nov. 30, 2017)
The music mogul resigned from his companies after a screenwriter wrote about an incident in 1991 in which she accused Simmons of coercing her into sex when she was 17-years-old. Simmons said he remembers the encounter differently, but apologized for being "thoughtless and insensitive."

Matt Lauer
Anchor, NBC Today Show (Fired Nov. 29, 2017)
NBC fired the anchor of the "Today Show" after the network "received a detailed complaint from a colleague about inappropriate sexual behavior in the workplace." Within hours, other women came forward accusing Lauer of lewd conduct and harassment.

Garrison Keillor
Former Host, A Prairie Home Companion (Fired Nov. 29, 2017)
Minnesota Public Radio fired the host of "The Writer's Almanac" after he was accused of inappropriate behavior when he was still the host of "A Prairie Home Companion". The NPR station says it hired an outside law firm in October to investigate the claims. Keillor says it involves an incident in which he touched a woman's bare skin while trying to pat her back. He says he apologized at the time.

Charlie Rose
Host, CBS This Morning & PBS' Charlie Rose show (Fired Nov. 21, 2017)
CBS fired Rose after eight women accused him of sexual harassment and unwanted advances. Rose is accused of groping female acquaintances and walking around naked in front of them. The women were either employees or aspired to work for the "Charlie Rose" show. PBS canceled the program.

John Lasseter
Co-founder, Pixar (Sabbatical Nov. 21, 2017)
Lasseter took a six-month sabbatical from the animation company after admitting "missteps".
Female employees and subordinates had come forward to accuse him of grabbing them, unwanted kissing and commenting on their physical attributes, according to The Hollywood Reporter..

Michigan U.S. Representative (Nov. 21, 2017)
Conyers has been under fire to resign after a news report revealed that he paid a Washington staffer more than $27,000 to settle sexual harassment claims. The woman says she was fired for refusing Conyers' sexual advances. Other staffers then came forward with similar harassment claims. Conyers is being investigated by the House Ethics Committee.

Al Franken
U.S. Senator, former Comedian (Nov. 16, 2017)
A radio and television host, Leeann Tweeden, wrote in a blog that Franken forcibly kissed her during a USO tour in 2006. A picture later circulated on social media showed Franken appearing to grope Tweeden's breasts while she slept. Tweeden accepted Franken's apology. Other women have since come forward to say Franken touched them inappropriately during campaign events in 2007 & 2008. Franken has called for a Senate ethics investigation into his conduct.

Tom Sizemore
Actor (Nov. 13, 2017)
The Hollywood Reporter reported the actor was sent home during a movie shoot in 2003 after an 11-year-old girl told her parents the actor touched her genitals. The parents never pressed charges and Sizemore returned to the set a month later. Sizemore denies the claim. Sizemore's management firm and talent agency have stopped representing him.

Jeffrey Tambor
Actor (Accused Nov. 8, 2017)
Tambor was accused by a former assistant of sexual misconduct and faces two claims he sexually assaulted other members of the "Transparent" cast and crew. Tambor left his role on the show but called the allegations "utterly untrue."

Michael Oreskes
Senior VP of News, NPR (Resigned Nov. 1, 2017)
Oreskes resigned from his position at National Public Radio after two women accused him of forcibly kissing them when he was Washington bureau chief of the New York Times in the 1990s. Several women at NPR said it was well known among women at the network that they should stay away from Oreskes.

Louis C.K.
Comedian & Actor (Nov. 9, 2017)
In a New York Times report, two female comedians accused Louis C.K. of fondling himself in front of them following a show in 2002. Other women reported similar incident in 2003 and 2005. C.K. said the stories were true. In a letter, he apologized and said he would reflect on his actions.

Roy Moore
Alabama Judge & Politician (Accusations Nov. 9, 2017)
Senate candidate Roy Moore is accused of sexual misconduct with five teenagers when he was in his thirties and worked as a Deputy District Attorney in Alabama in the 1970s. One woman, Leigh Corfman, says she was 14 when Moore took her to his home, took off her clothes and rubbed her genitals. Moore denies the claims and continues his Senate campaign.

Brett Ratner
Director, Filmmaker (Nov. 2, 2017)
The director of Rush Hour and Horrible Bosses has been accused by six women of sexual misconduct that allegedly took place in private homes, movie sets and industry events. Several women claim Ratner masturbated in front of them and made unwanted sexual advances. Warner Brothers severed ties with Ratner in early November. His attorney disputed the accounts.

Actor (Oct. 29, 2017)
Actor Anthony Rapp says Spacey appeared drunk when he allegedly made sexual advances in 1986 when Rapp was 14-years-old. Spacey apologized and announced he was gay. 15 other people have made similar claims of abuse, including five people who said they were teens at the time. The accusations include sexual harassment, assault and attempted rape. On November 1, Spacey said he would seek treatment. On October 31, Netflix suspended filming of the final season of "House of Cards". Three days later Spacey was fired from the show.

George H.W. Bush
Former President (Oct. 25, 2017)
Television actress Heather Lind accused the former president of touching her from behind while she was posing for a photo next to him in 2014. She also says he told her a dirty joke. Other women came forward and said Bush groped them while taking photos, including a 16 year-old girl.

Mark Halperin
Journalist & Author (Oct. 25, 2017)
More than a dozen women accused NBC journalist Mark Halperin of sexually harassing them or assaulting them during his time as political director of ABC News. The women say he propositioned employees for sex and kissing. One employee says Halperin fondled himself in front of her. NBC fired Halperin after the initial accusations became public.

James Toback
Screenwriter & Film Director (Oct. 22, 2017)
The Los Angeles Times reported that 38 women have accused Toback of sexual harassment and assault during meetings and casting calls. The women say he asked about their sex lives, grabbed his crotch and fondled himself. After the initial story, more than 300 have made similar claims. His accusers include actresses Rachel McAdams, Julianne Moore & Selma Blair. Toback denies the allegations.

John Besh
Celebrity Chef (Oct. 21, 2017)
In a Times-Picayune investigation, 25 current and former employees of Besh Restaurant Group claimed to be victims of sexual harassment on the job, and accused Besh of fostering rampant sexual harassment at his restaurants. The women said they were sexually harassed and verbally assaulted almost every day. Besh resigned as head of the BRG.

Chris Savino
Creator "The Loud House", Nickelodeon (Oct. 19, 2017)
Savino was fired by Nickelodeon after at least 12 women accused him of making unwanted sexual advances and threatening to blacklist women with whom he ended relationships.

Roy Price
Programming Chief, Amazon Studios (Fired Oct. 17, 2017)
Price resigned five days after an executive producer of the hit Amazon show "The Man in the High Castle" accused him of lewd comments and repeatedly propositioning her in 2015.

Harvey Weinstein
Film Producer, The Weinstein Company (Fired Oct. 8, 2017)
Weinstein was fired by the board of his movie studio after more than 80 women accused him of sexual harassment, assault or rape. Weinstein says it was all consensual sex. The New York Times first reported the accusations on October 5. His accusers include many top actresses, including Ashley Judd, Gwyneth Paltrow, Angelina Jolie and Rose McGowan. Weinstein was also ousted from the Academy of Motion Picture Arts and Sciences.