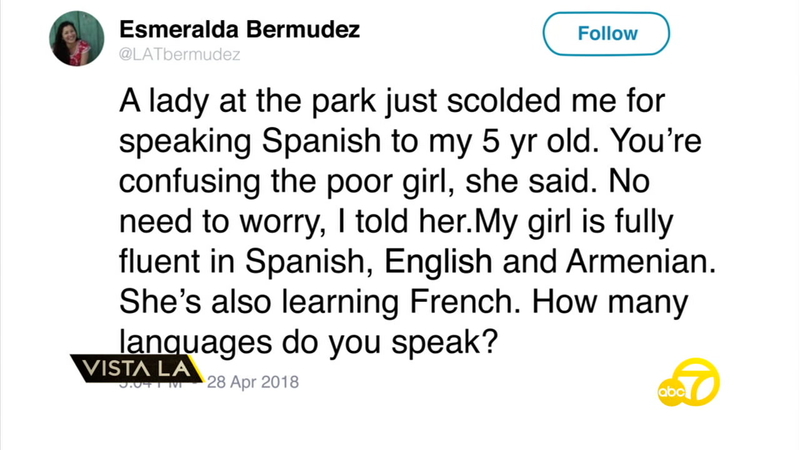 LOS ANGELES -- "Speak English," a stranger demanded. Those words were directed at Esmeralda Bermudez, a mom enjoying the day with her 5-year-old daughter at a La Mirada park.

"From the moment we got there I felt this person staring... at some point I saw her take this step toward me and she said, 'Speak English, you're confusing the poor girl,'" Bermudez recounted.

Those two words instantly catapulted the 38-year-old mother back to her childhood days in South Whittier, where racial slurs tainted her otherwise happy childhood.

"I told her, 'You know, you don't need to worry about my daughter. She speaks English, Armenian, Spanish, and she's learning French,'" Bermudez said to the stranger. Bermudez then asked the woman how many languages she spoke.

Flooded with emotions, they left the park for a long drive home. That night, Bermudez felt compelled to tweet about the incident.

The 16-year veteran Los Angeles Times journalist says what happened next was completely unexpected. Within a few days, the tweet went viral -- reaching millions of people worldwide. And for weeks the tweet continued to reach millions more, and Bermudez knew she had to write about it for the L.A. Times.

The response from the article was overwhelmingly positive. She never imagined she would become the subject of her own story. People wrote in from every corner of the world sharing their personal experiences with language, culture and and identity.

"It was just this really neat collection of voices," the local journalist said.

Thousands were also curious about her family's multilingual home, but to understand this, it's essential to first understand Bermudez's life story.

She emigrated from El Salvador at the age of five and settled in South Whittier. Her first language was Spanish, and she quickly learned English as a young girl.

Bermudez said Spanish combined with English was her superpower. She remembers words were celebrated in her home and whenever needed, she became the family's translator.

In 2013, when Bermudez and her husband, David, who is Armenian-American, had their first baby, they knew they wanted to pass on their native languages.

Her journalist instincts prompted her to research and meet with several linguistic experts. Together, they decided that each parent would only speak in their native tongue, allowing the school and world to introduce English and other languages.

"It's been a wonder to see her thirst and hunger for words and languages," Bermudez proudly said.

The sound of her daughter's voice resonates hope. And the feelings she experienced that day at the park, and the voice demanding her to "speak English" no longer carry a sting. Instead, there is comfort from the extraordinary support Bermudez has received and a sense of pride that she stood her ground.