Could you take on this whopping 6 lb. burger challenge in under an hour? 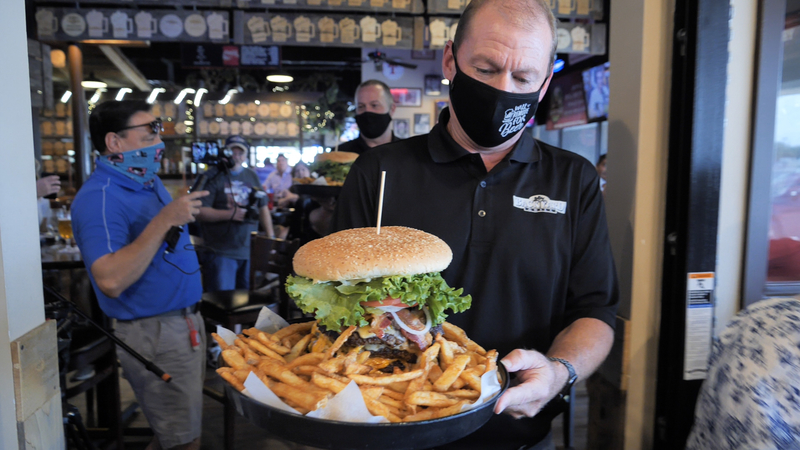 Could you take on this 6 lb. burger challenge in under an hour?

CYPRESS, Texas -- Texans always love a good food challenge - and this restaurant in Cypress, just outside of Houston, has one that's hard to beat!

The Backyard Grill is known for its enormous burgers, but "The Beast" is the king of them all.

If that's not enough for you, "The Beast" is also served up with three pounds of fries! Over 400 people have tried to take on "The Beast," but only 10 have actually finished the whole thing by themselves.

If you polish it off in under an hour, then the $45.99 burger is yours for free!
Report a correction or typo
Related topics:
cypressabc13 plus cypressfoodabc13 plusktrklocalishmy go toburgers
ABC13 PLUS CYPRESS
A Texas twist on traditional kolaches
Family helps mom in rehab and baby have second chance at life
Could you take on this 6 lb. burger challenge in under an hour?
11-year-old brings joy with 'quarantine caterpillar' project
TOP STORIES
Newsom picks 10 winners of $15M to celebrate reopening
Everything changing in CA's reopening today
CA reopening: Where you'll still have to wear a mask
ABC7 explores what's changed since CA COVID-19 rules lifted
Single Oakland father gets new appraisal for $150K more in value
UC will require students, faculty and staff to be vaccinated
US COVID death toll hits 600K, equal to yearly cancer toll
Show More
Temps to reach up to 108 in parts of Bay Area during heat wave
Out-in-the-open theft at SF Walgreens caught on video
Calif. reopening marred by employee shortage
COVID-19 updates: SF bringing back cable cars in August
Why restaurants may see reduced capacity after CA reopening
More TOP STORIES News