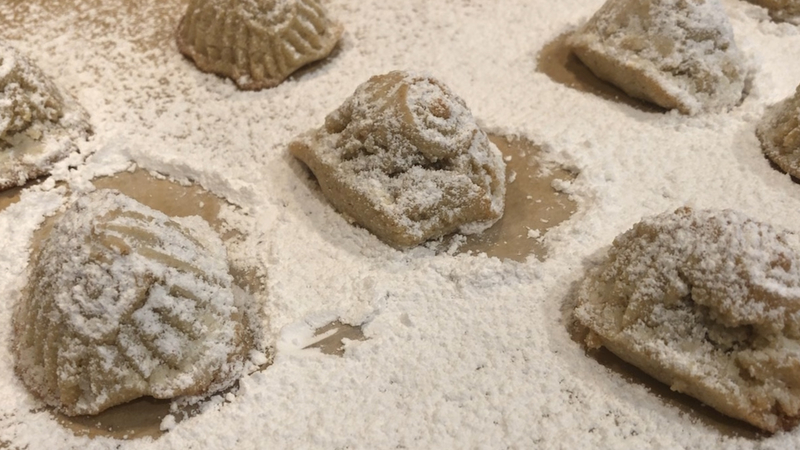 CHICAGO -- After seeing the devastation that hit Beirut in early August, Dani Abboud knew they needed to do something to help their country rebuild.

"I still have family there and thinking about them having to deal with this while I was in the comfort of my apartment in Chicago was a really hard pill to swallow," Abboud said. "I just wanted to do something to feel helpful."

Abboud is Lebanese American. They planned to visit Beirut this year, but because of COVID-19, that didn't happen.

"For so many people in America and around the world, the only image they ever see of the Middle East is destruction or a war zone or a bombing, and it's just not like that," Abboud said.

Since October of 2019, Lebanon has been in a state of political unrest. Abboud wanted to help out in someway earlier, but couldn't really figure out how.

Once the country's capital, Beirut, was hit with explosions during the first week of August, Abboud knew it was time to take action.

So they're making ma'amoul, a traditional Lebanese dessert, and giving it to neighbors in exchange for donations to Lebanese charities.

"Ma'amoul is kind of like a cookie traditionally eaten around religious holidays," Abboud said. "I learned how to make it this past Easter. Getting to give people something as simple as these little cookies makes me feel like I'm giving a better glimpse as to what Lebanese culture is."

Abboud's ma'amouls are filled with dates and are even vegan friendly.

"I've got this special mold that my dad gave me from Lebanon and I've got time, so I might as well," they added.

Abboud plans to do bake ma'amoul for the community as long as they can, and can be contacted via Instagram.
Report a correction or typo
Related topics:
chicagoloopexplosioncharityall goodu.s. & worldlocalishfundraiserwls
LOCALISH
Woodworker creates pieces from trees devastated by drought
Teen honored by ESPN for helping kids in Watts
Sip into these Instagram-worthy cocktails at NJ restaurant
Long Island artist paints live portraits at weddings
TOP STORIES
SFGH to give supplemental mRNA vaccine to those who got J&J shot
EXCLUSIVE: SJ businesses targeted by anti-maskers amid surge
Delta variant creates 'tricky path' for Newsom ahead of recall
Bay Area health officers issue new indoor mask mandate
Kaiser Permanente, others announce vaccination requirements
Can a breakthrough infection still lead to long haul COVID-19?
7 On Your Side investigates calamity at California EDD
Show More
CDC COVID map shows areas of high transmission in Bay Area
Simone Biles wins bronze on balance beam
Epidemiologist explains how effective the COVID-19 vaccine really is
Evictions expected to spike as pandemic moratorium ends
I-580 reopens after police activity closes freeway in both directions
More TOP STORIES News