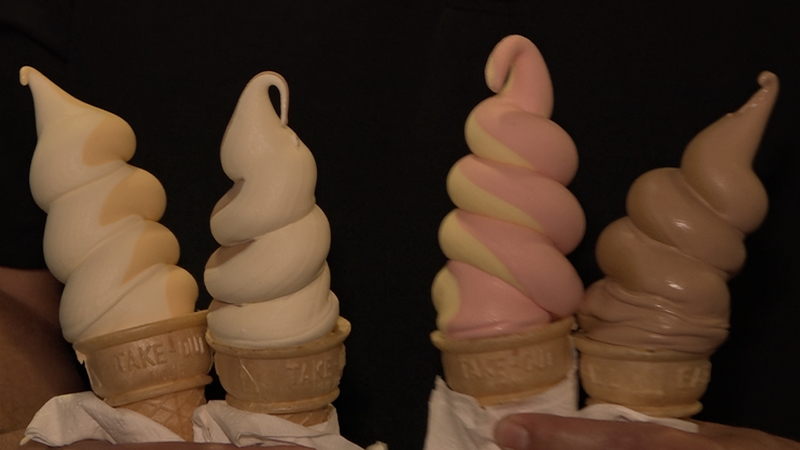 PLEASANTON, Calif. -- Pleasanton Meadowlark Dairy's secrets to success are ice cream and keeping the old school drive-thru alive. The dairy is celebrating 100 years in business and their formula to longevity is simple: not changing a whole lot.

Visiting the drive-thru market is like being taken back in time to the 1950's, when the prices were low and friendly employees would walk to the driver's side window to take food orders.

Meadowlark still operates in the same way, allowing customers to pick up basic goods like milk and eggs, but what has people lining up around the block is the dairy's soft-serve ice cream.

The dairy was established in 1919 and was formerly owned by Walter Briggs Sr. who started a world class dairy company.

The original location was on 153 acres of land on Foothill Road in Pleasanton.

It is known to be the first certified dairy in California to earn a "Grade A" designation for quality and cleanliness.

Meadowlark was a large and successful dairy known for producing exceptional bacteria-free milk.

Ice cream came into the picture when current Meadowlark Dairy owners found an ice cream machine inside a truck they purchased from a school auction.

A few decades earlier Jannes and Janna Takens arrived on Ellis Isand from Holland after World War II. With only one-hundred dollars in their pocket.

The Takens decided to take the train to California to live with a family member. While the Takens were looking for a job they saw an advertisement for dairy milkers in the local newspaper.

"In the 50's my grandpa came to the ranch, Meadowlark dairy, and he started managing it," said Jesse Takens, grandson of the Jannes and Janna.

In the late 50's the Takens signed a ten-year lease and bought the dairy farm after the death of Walter Briggs Sr. The Briggs family sold the land to The Great Southwest Corporation. Currently the land belongs to the City of Pleasanton and a real estate developer.

The Takens moved the cows to Tracy and built a new processing plant in Downtown Pleasanton.

Bruce Taken bought Meadowlark Drive-thru from his parents in the 80's and brought an ice cream machine to the dairy. It wasn't planned but the soft-serve ice cream quickly became a Meadowlark Dairy staple.

Meadowlark no longer has cows but source their milk from a local dairy company.

Nearly 40 years later customers are still lining up around the corner for the their soft-serve ice cream. Don't let the long lines deter you because Meadowlark Dairy employees are friendly and quick.

Not only will you feel like you're driving back in time but you will pay a vintage price.