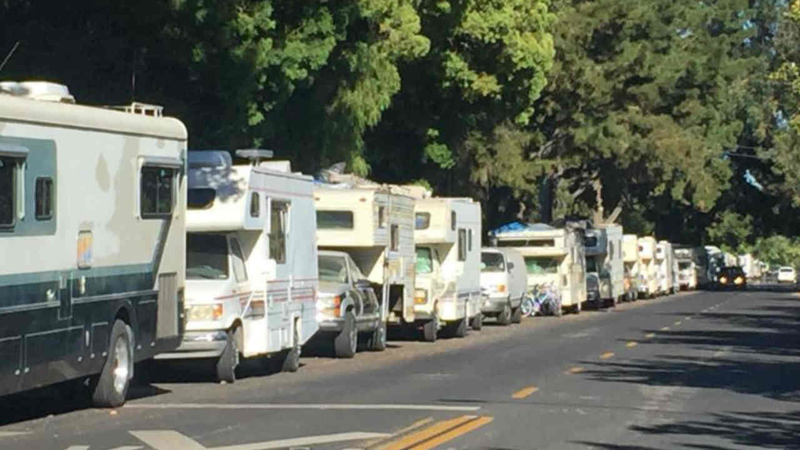 MOUNTAIN VIEW, Calif. (KGO) -- A 2-year pilot program to help people living in their vehicles is about to kick off next month in Mountain View.

Dozens of RVs and cars line Crisanto Avenue next to Rengstorff Park in Mountain View.

"What we're seeing more and more is a lot of middle class people being moved into their vehicles, a lot of first time homeless, homeless less than a year," said Pastor Brian Leong of Lord's Grace Christian Church in Mountain View. Leong is the Founder and President of Move Mountain View, a non-profit aimed at reducing homelessness.

In 2015 he met with Santa Clara County Supervisor Joe Simitian.

"He asked me hey do you think the churches would be willing to have people living in their cars park in the church in the evenings," said Leong.

From there, "Lots of Love" was born.

Two churches including St. Timothy's Episcopal Church have officially signed on to the pilot program which kicks off in July.

"One of the things that's key is by getting these folks off the street we also have an opportunity to give them the help they need to find a path out of homelessness," said Simitian.

The program is being modeled off one in Santa Barbara.

The churches have liability insurance and a lot monitor will be on call from 7 p.m. to 7 a.m.

Individuals who take part in the program will have to follow a set of rules. Their space in the lot will be reviewed and possibly renewed on a monthly basis.

"It's not a total solution I know that but this is one of those times where it's really better to light one candle than to curse the darkness," said Simitian.