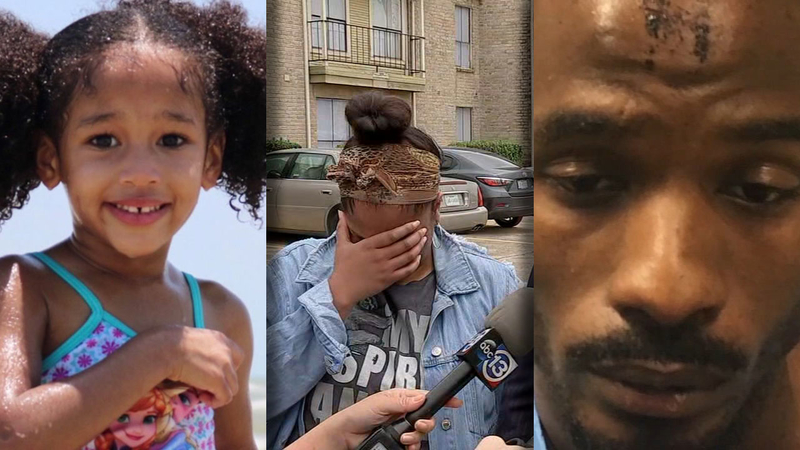 HOUSTON, Texas -- Little 4-year-old Maleah Davis was reported missing nearly a week ago, with no sign of her since. Now, community activist Quanell X is making what he calls an 'urgent statement' in her disappearance.

Vence was the last person known to have seen Maleah. He told police that he and Maleah were abducted by three men, along with his 1-year-old son. Vence and the boy were released, but Maleah remains missing.

Quanell suggested that Vence was angry after he and Bowens fought and broke up.

Tim Miller spoke with Eyewitness News about the recent allegations in the search for Maleah Davis.

"On the day that Brittany left to be with her sick father -- her dying father -- to be with family, there was a huge fight between her and him," Quanell said. "He was hurt, he was angry, he was upset."

"She told him she was giving back his ring and that she was not going to marry him. I believe that caused him to snap in anger," Quanell said. "There is a reason to believe, based on what I know now, there's issues of him possibly molesting young Maleah."

Houston police say they have no additional comment during their ongoing investigation. Eyewitness News is in the process of reaching out to Vence for a response to the allegations.

Investigators searched the Nissan Altima, but found no visible evidence inside of it.

On Thursday morning, the vehicle belonging to Maleah's family was found in Missouri City.

Investigators searched the Nissan Altima, but found no visible evidence inside of it. They said there was nothing suspicious inside of the car, and that it looked normal, meaning that there are no obvious signs of anything unusual.

Detective Ken Fregia said that the car was unlocked when officials arrived, and that it was clean.

The vehicle was taken to the Houston Police Department for further processing.

Bowens was also at the scene, where she was consoled. "Where is Maleah? Where is my baby?" she tearfully yelled.

BREAKING: the silver Nissan Altima, reported stolen by Maleah’s stepfather is found in Missouri City. Mother of the missing 4YO is on scene tearfully yelling “Where is my baby?” @abc13houston #FINDMALEAH #MaleahDavis pic.twitter.com/XnQOebw5D9

Investigators give update on search for Maleah

Volunteers resumed their search for Maleah Thursday morning after weather halted it the day before.

Vence, who police have referred to as Maleah's stepfather, originally told officers he was attacked while checking his tire over the weekend. But Sugar Land police say his story changed multiple times when they questioned him.

According to police, Vence showed up at Sugar Land Methodist Hospital on Saturday night, where an off-duty officer noticed fresh wounds on him. Vence claimed to be the victim of a roadside attack by three Hispanic men the day before while on his way to pick up the girl's mother from Bush Intercontinental Airport.

Police also initially stated Vence was with Maleah and his 1-year-old son when he was left unconscious. He stated that he regained consciousness late Saturday afternoon on the side of Highway 6 near First Colony Mall. His son was with him but Maleah was not.

Vence's son is now in the care of a relative.

On Wednesday, the Sugar Land Police Department revealed the original story had changed while Vence was questioned.

"During the initial interview, the man's story did change several times and some of what he told us just didn't add up," said Doug Adolph, the spokesperson for Sugar Land police.

Houston police took command of the investigation since the attack reportedly happened in the city limits.

SLPD also revealed the family's Nissan Altima, which was reported stolen after the attack on Vence, was seen driving around Sugar Land at 3 p.m. Saturday, just several hours before he told police that he regained consciousness.

Authorities said Thursday during a press conference that they did not notice anything unusual about the tires.

So far, Vence is not facing any charges, and police have not considered him a suspect in Maleah's disappearance.

Fregia said they have reached out to Vence to do a sketch of the possible suspects, but have not spoken to him in a couple days. They are still looking for him.

On Tuesday, Maleah's biological father, Craig Davis, spoke for the first time since the search began to ABC13 Eyewitness News. He said he wanted to speak directly with Vence about what happened.

Speaking first to ABC13, the biological father of Maleah Davis wants the girl's stepdad to speak to him about what happened when she disappeared.

Earlier this week, ABC13 learned the little girl, along with two of her siblings, was taken from her home last August as CPS investigated her head injuries. In court documents from Jan. 25, doctors couldn't confirm whether Maleah's injuries were caused by abuse, and due to this, CPS recommended Maleah and her siblings be returned to their family. They were back home by the following month.

The family told Eyewitness News the injuries were from an accidental fall.

JUST IN: medical professionals did not believe the family’s story of how Maleah hit her head causing severe head trauma, still she and her two brothers were returned to mom and stepfather in February. @abc13houston details at 6pm. #FINDMALEAH #MaleahDavis pic.twitter.com/BIkc8SQngA