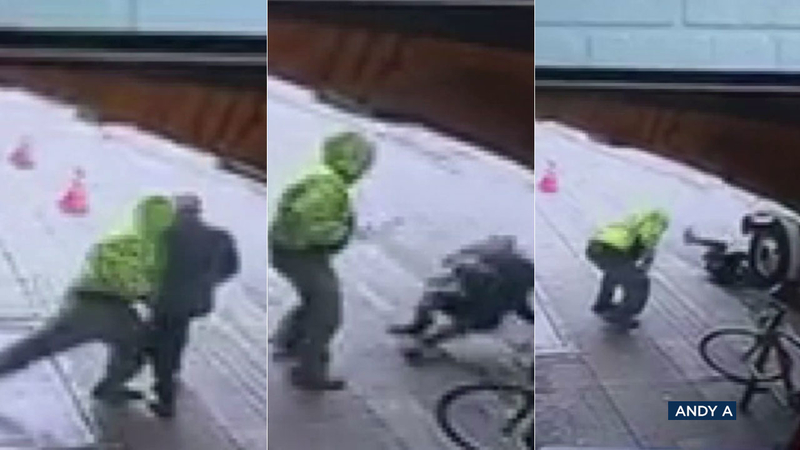 Suspect arrested for pushing man under truck in downtown LA

DOWNTOWN LOS ANGELES -- A suspect is in custody for a brazen attack caught on video in which a man was pushed under the wheels of a truck in downtown Los Angeles.

The victim was left in critical condition with a collapsed lung and broken bones after being pushed into the street and run over by a truck in the apparently random attack.

IN CUSTODY!!
Earlier, @ABC7 aired a clip of an individual pushing a passerby underneath a panel truck. Thanks to our partners @LAFD he is now in custody. Alert Fire Fighters observed him walking in the #DTLA area and called for us to respond, where he was arrested. @LAPDHQ

Firefighters saw the video run on ABC7 and recognized the suspect - seen in the video wearing a lime-green hoodie - less than an hour later. They spotted him near Hill and Third streets in downtown and called 911.

"It was definitely the bright neon rain jacket and the baggy pants, and just the demeanor the guy had," firefighter Austen Johnson said.

The suspect was taken into custody a short time later. He was described as combative and did not have identification on him.

The suspect is expected to face a charge of attempted murder. Witnesses said they believe he is homeless.

At first the suspect is sitting at an outside table on the sidewalk watching people walk by after 10 a.m. Wednesday in the 300 block of West 6th Street downtown.

As one man approaches, the suspect stands up and lunges into him, pushing him toward the street.

The mans tumbles to the ground and over the curb just as a box truck is driving by.

As the victim falls under the truck's front wheels, the suspect leans down to watch him get crumpled under the tire.

He then puts his hands in his pockets and casually walks away.

The victim suffered a collapsed lung and broken bones and was in critical condition at a local hospital.

Police described the suspect as a white male, about 5 feet 8 inches tall, weighing 170 pounds and wearing a lime green hoodie.