KGO
By Jennifer Olney
SAN FRANCISCO (KGO) -- ABC7 News has been following the miracle rescue story of a bear named Eve since 2018 and now we are excited to tell you she has found her forever home.

Dramatic photos and video tell the story of Eve's incredible transformation after she was found near death in Butte County in a trash bin in December 2017.

PHOTOS: Amazing transformation of a very lucky CA bear found with no hair

Eve was suffering from mange, a skin disease so bad she lost all her fur. Eve looked so odd, her rescuers were not even sure what kind of animal she was.
Once they realized Eve was a bear, she got emergency treatment from Lake Tahoe's Bear League. Then volunteers drove her to San Diego County for rehab at the Fund for Animals Wildlife Center. They named her Eve because she arrived on Christmas Eve.

The wildlife center had never dealt with such an extreme case of mange before, according to director Matt Anderson. The staff gave Eve special life-saving baths and months of expert care that left her skin healthy and ready to grow fur. She even started looking like a bear again.

The original goal was to release Eve back to the wild, but as time went on, the staff realized it would not be possible. Even though a lot of hair did grow back, after two years it's still very patchy. Eve cannot survive in the wild without a full fur coat, so she needed a different kind of home, one with space for a full-grown bear.

That's when an animal sanctuary called the Cleveland Amory Black Beauty Ranch in Murchison, Texas stepped in. The ranch is affiliated with both the Humane Society of the U.S. and The Fund for Animals, and there was room for Eve.

A California rescue group called Lions, Tigers and Bears offered to provide transportation in a specially outfitted truck, and now Eve has moved 1,400 miles to her new home.
Eve's new accommodations feature an inside den that is heated, so she can keep warm even without a full fur coat.

She also has plenty of room outside.

"She has an acre of open wooded space that's fenced in, and now she gets to live like a bear," said ranch director Noelle Almrud. "She's got the best possible outcome for not being able to be released into the wild."

But the road from a hairless bear to a happy ending is not cheap. Eve's care is expected to cost about $15,000 a year - all of which must be raised with private donations.

If you would like to help fund Eve's new home, here is the link to the Fund for Animals.
Report a correction or typo
Related topics:
pets & animalstexaslake tahoesan diegoanimal rescueveterinariannaturebear
Copyright © 2021 KGO-TV. All Rights Reserved.
BEAR
VIDEO: Creepy wolf robot wards off wild bear in Japanese town 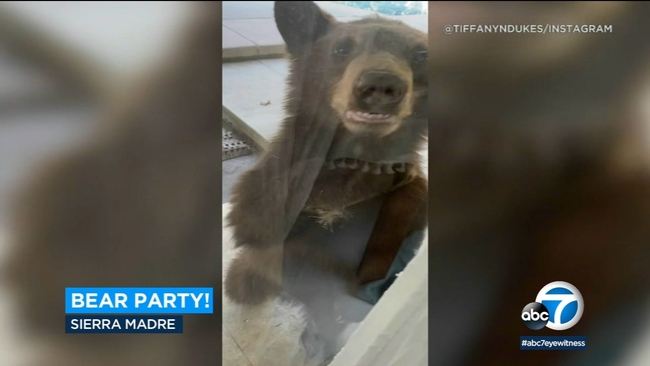