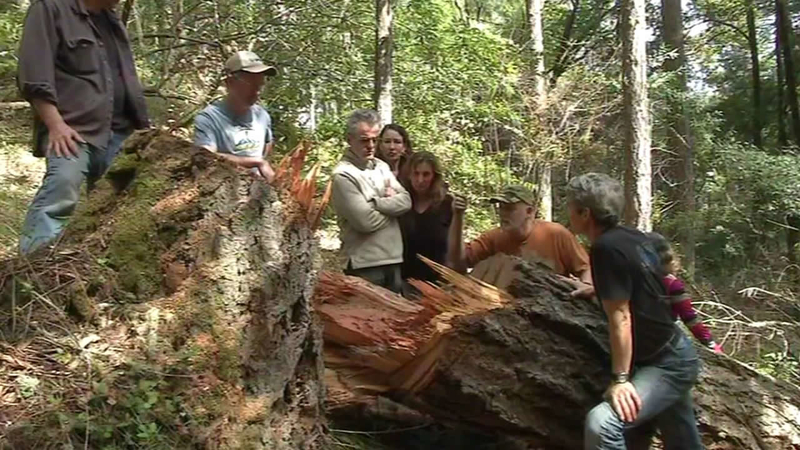 MARIN COUNTY, Calif. (KGO) -- Marin County is working on a trail management plan that will shut down some hiking and biking trails to save money and protect the environment. It will be likely be many months before most of the closures take place, but one has already been shut down and the outrage it has generated may be a sign of what is to come.

The Morrison Trail is in the Gary Giacomini Open Space Preserve in Forest Knolls. Neighbors say they have used it for more than a decade. But open space officials say the trail is illegal and they sent a crew in to shut it down. The crew cut a couple dozen live trees, and raked brush over the trail.

The people who use the trail are outraged it was closed, and even angrier so many large trees were cut. They also claim the work to shut down the trail caused erosion.

Lisa Luzzi is a hiker and biker rider. She called the trail closure horrifying. "To see this and to think that the land managers believe it's OK and this is their prescribed method for shutting a trail, it's not right."

About a dozen neighbors met ABC7 News at the foot of Morrison Trail to share their anger. Rusty Hendlin said one of the reasons he bought his home was to hike on the trail, which is just a few hundred feet from his door. "It feels like the county is at war with the locals. And they are not going to win the war."

The Marin County Open Space District has spent the last four years creating a Road and Trails Management Plan for 16,000 acres of land covered with a chaotic patchwork of fire roads and trails. A lot of the trails sprang up unofficially over the years as people took shortcuts or just wandered off the beaten path. Some are unsafe or bad for the environment and the district says it costs too much money to maintain them all.

The county has been working on this problem since the 1990s according to former Open Space Commissioner Jean Berensmeier. "We have in my opinion some selfish people. We have illegal trail building that has gone on for years. We need to get a handle on that because we have limited space."

Carl Somers, with the Open Space District, said cutting some trees can actually benefit other endangered plants by creating more open sky and letting in sunlight. The county is especially concerned about a rare type of manzanita.

But the neighbors say that threatened manzanita is a quarter of a mile away from the trail, so there was no need to cut down live trees.

"This is a beautiful, pristine forest. A tiny little social trail was in here for years, doing no damage, that's the point, doing no harm. And what they've done is tremendously damaging. It's an outrage," according to neighbor Jack Gescheidt.

A few days after the trail was closed, someone cleared it and hikers are using it again. Somers says crews will be back to shut it down, but won't say when. "If there are people out there who are bent on criminally destroying public resources, that's something that has to be approached from a law enforcement perspective."

The people fighting to save the trail are not giving up and they are warning others their favorite neighborhood trail may be next.

Last month, the Open Space District released a proposal for closing or re-designating trails in the southern part of Marin County. There is no word yet on when the proposals for the rest of the county will be ready.

The public is supposed to get a chance to comment on the proposals, but that did not happen in the case of the Morrison Trail.

Here is a link to the road and trail plan: Marin County Road and Trail Management Plan/Environmental Impact Report

If you want to see the actual proposed maps, they are considered so sensitive they are not being posted online. You have to make an appointment at the Open Space District to see them.