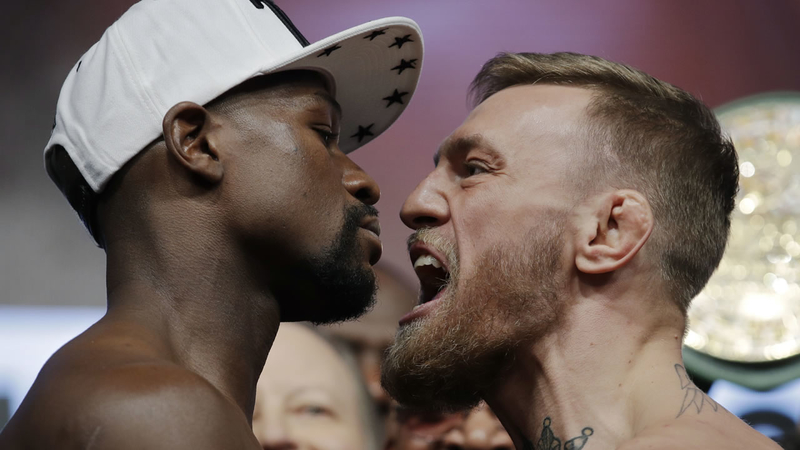 LARRY BEIL: Mo' money, no problems for Mayweather and McGregor

SAN FRANCISCO (KGO) -- The fleecing of the universe is on Saturday night -- Floyd Mayweather versus Conor McGregor.

RELATED: Draymond Green gets into it with Conor McGregor on Instagram after fighter trolls Mayweather

I've said from the beginning that this is a money grab. Floyd will make another $100 or $200 million to give McGregor a boxing lesson.

McGregor will gladly take home $100 million to get hit in the face repeatedly.

The reason this fight is happening at all is because fans of mixed martial arts want to believe their guy -- McGregor can win and give more legitimacy to their sport. The promoters are counting on the MMA fans to plunk down $100 for this farce.

But it's not going to happen. The best boxers on the planet have tried to beat Mayweather for the past 20 years. Nobody has been able to do it.

And now, a guy who spends half of his training as a wrestler is going to step into the ring and beat Floyd? Come on.

A buddy of mine was in Mayweather's final workout and said he looked razor sharp. Look for vicious body punches, which McGregor isn't used to seeing in MMA.

In the end, I believe there are two guarantees -- Mayweather and McGregor will laugh to the bank, and everybody that buys the Pay-Per-View will be asking -- Why did we pay $100 for that?
Report a correction or typo
Related topics:
sportslas vegasmmafightmoneyathletesboxingevents
Copyright © 2022 KGO-TV. All Rights Reserved.
RELATED
Draymond Green gets into it with McGregor on Instagram after fighter trolls Mayweather
TOP STORIES
SF LGBTQ+ police say they will not march in annual Pride Parade
ABC7's new 24/7 live stream offers local news, weather
2 women killed, man injured after taxi cab hits pedestrians in SF
Pfizer: COVID vaccine for kids 6 months to 5 years old 80% effective
Murdered for Millions | Watch full documentary
Father puts 1,000 miles on his car to find specialty formula
Texas woman sought in fatal shooting of SF pro cyclist: US Marshals
Show More
Red Flag Warning to go into effect for parts of Bay Area Monday
'Absolutely terrified' SJ teen boy dies hours after 'sextortion' scam
'I fought': Trevor Reed describes his survival in a Russian prison
Biden: Monkeypox threat doesn't rise to level of COVID-19
More than 75,000 pounds of baby formula lands in US amid shortage
More TOP STORIES News