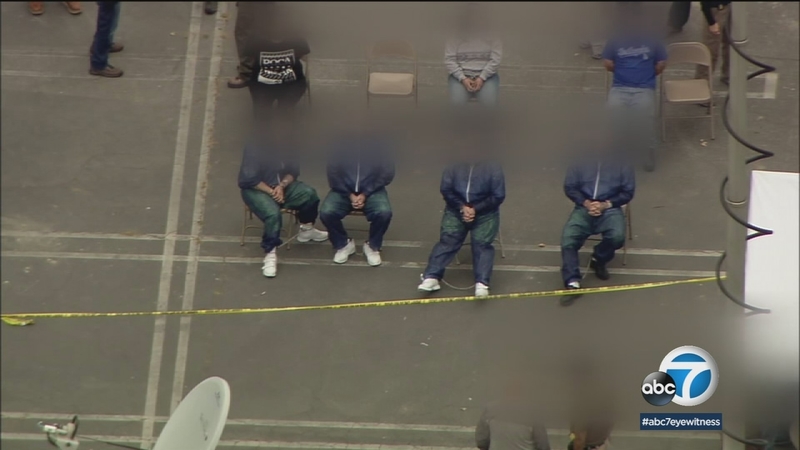 LOS ANGELES -- Leaders of the notorious Mexican Mafia were charged Wednesday with running a conspiracy to control drug trafficking and carry out violence ordered from inside Los Angeles County jails.

The U.S. attorney's office charged 83 people tied to racketeering conspiracies that alleged they ran drugs and carried out violent assaults and even murders.

"These cases have delivered a major blow to the Mexican Mafia and leaders of many of the street gangs under the control of the organization," U.S. Attorney Nick Hanna said. "By taking out the gang members who control the jails, and by disrupting their communications network, we undermined the Mexican Mafia's ability to coordinate street gang activity."

Authorities said 32 people were arrested in the operation, 35 were already in custody and another 16 remain at large as fugitives. The charges were outlined in two freshly unsealed indictments.

According to the indictments, Mexican Mafia leaders called shots from behind bars that controlled drug dealing and violence both inside jail and on the streets. The indictments detailed how the Mexican Mafia, known as the "gang of gangs," established a methodical system to communicate from behind bars, control gang territory and collect "taxes" for drug sales through extortion.

Drugs smuggled into the prison by facilitators of the Mexican Mafia leader were required to be sold first, with the proceeds going to that leader. Other groups that brought in drugs had to give a third of their contraband to the Mexican Mafia leadership. The fee, known as a "thirds" tax, gave the name "Operation Dirty Thirds" to the police investigation.

Authorities said the drugs were often smuggled into jail by people who would purposely get arrested on minor offenses and hide drugs in body cavities.

The indictments said the gang enriched itself through drug sales, collecting taxes on drugs and even collecting a share of purchases from the jail commissary. It was able to exert control by threatening and carrying out violence if people didn't pay up or follow the rules. The indictments also stated that a lawyer and several women referred to as "secretaries" helped facilitate activities and communication outside of jails.

One of the indictments said a Mexican Mafia member named Jose Landa-Rodriguez and two now-deceased members of the gang controlled operations in the jail between 2012 and 2016.

Landa-Rodriquez, 55, is accused of sanctioning murders, assaults and the kidnapping and killing of a relative of a gang member who defied him, the U.S. attorney's office said. A second higher-up, Luis Vega, 33, ordered a murder and directed assaults against those who showed disrespect or didn't obey rules, the indictment said.

Approximately 500 members of law enforcement were involved in the sweep. The task force included the FBI, the Drug Enforcement Administration and the Los Angeles County Sheriff's Department and the Pomona Police Department.