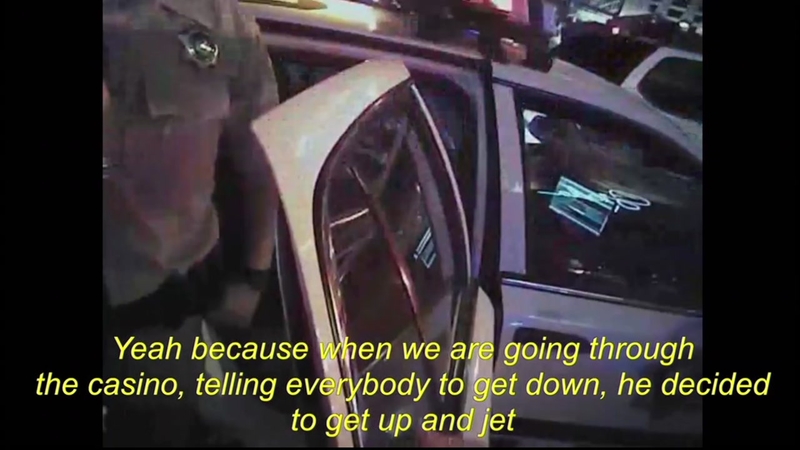 LAS VEGAS (KGO) -- The full video of Seattle Seahawks player Michael Bennett's with Las Vegas police has been released. Bennett accused the department of racially motivated excessive force after he says he was threatened at gunpoint following a report that shots were heard at a casino hotel.


The head of Las Vegas police says officers acted appropriately and professionally detaining Bennett after a report of gunfire at the after-hours club on the Las Vegas Strip.

Lombardo says nothing has been found to support Bennett's allegation, made on Twitter, that an officer put a gun to his head and threatened to blow his head off.

Police say Bennett darted behind a row of slot machines and failed to stop when officers noticed him running from a crowded casino during a search for what police believed was an active shooter.

Bennett posted a Twitter account early Wednesday saying police singled him out as he was running from a sharp sound following the Aug. 26 fight between Floyd Mayweather Jr. and Conor McGregor.

This violation that happened against my Brother Michael Bennett is disgusting and unjust. I stand with Michael and I stand with the people. pic.twitter.com/TqXFiso6lk

Police later attributed the report of gunfire to the sound of velvet rope stands falling over.

Bennett spoke briefly Wednesday at the Seahawks' practice facility and said being detained by Las Vegas police was a "traumatic" experience. He declined to go into specifics of what happened during the encounter.

"It's a tough situation for me. Do I think every police officer is bad? No. I don't believe that," Bennett said. "Do I believe there are some people out there who judge people based on the color of their skin? I do believe that."

"I hope he thinks this becomes a lesson for other young people if this happens to them, that they do have rights," Burris told ABC7 News. "And the hope that other police officers will not be so quick to snatch someone off the street and threaten them."

Bennett said he had constant thoughts of his wife and kids while being detained. He eventually stopped speaking and walked away from the podium when asked about his family.

"It sucks that the country that we live in now sometimes you get profiled for the color of your skin," Bennett said.

"What happened to Michael is a classic illustration of the reality of inequalities demonstrated daily," said Seattle Seahawks Coach Pete Carroll.