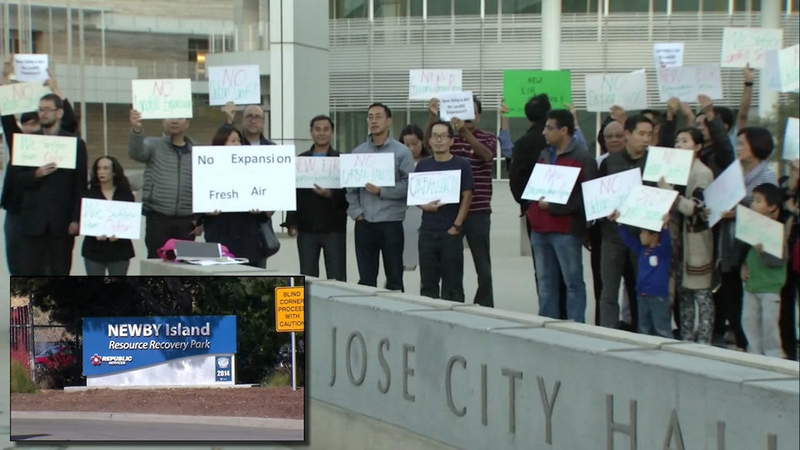 MILPITAS, Calif. (KGO) -- In the South Bay there's been a growing battle between neighbors over trash.

The San Jose Planning Commission was expected to vote on whether to allow the expansion of the Newby Island Landfill.

The meeting started at 6:30 p.m. Wednesday and hundreds of concerned citizens are expected to attend. Many of them pleading for compassion from the commission.

For residents in Milpitas and Fremont, an ongoing problem that they say has become almost unbearable.

"It's a very pungent smell, it's one of those smells, that if you've ever been in a chemistry lab, you will smell that," said Fremont resident Abhijit Basu

Neighbors point to the landfill at the privately-run Newby Island Resource Recovery Park.

"San Jose is in charge of the Newby Landfill, and we are here to suffer from it," said Milpitas resident Tom Clavel.

Two years ago, the city of San Jose approved a permit to increase the height of the landfill by nearly a 100 feet, and to extend the landfill's closing date from 2025 to 2041.

But the city of Milpitas filed an appeal, prompting an odor study that took a little more than a year to complete. The San Jose Planning Commission should decide Wednesday whether to accept or reject the appeal.

According to the Planning Department, the study concluded that most of the odor at Newby Island actually comes from the park's recycling and green waste facilities, as compared to the actual landfill.

"The open face will be limited to no more than one acre. There's going to be rules about the daily cover that goes over the open landfill face, and other conditions," said Cheryl Wessling of the City of San Jose.

Despite the report, some neighbors are skeptical.

And they're now pleading with the commission to take their side.