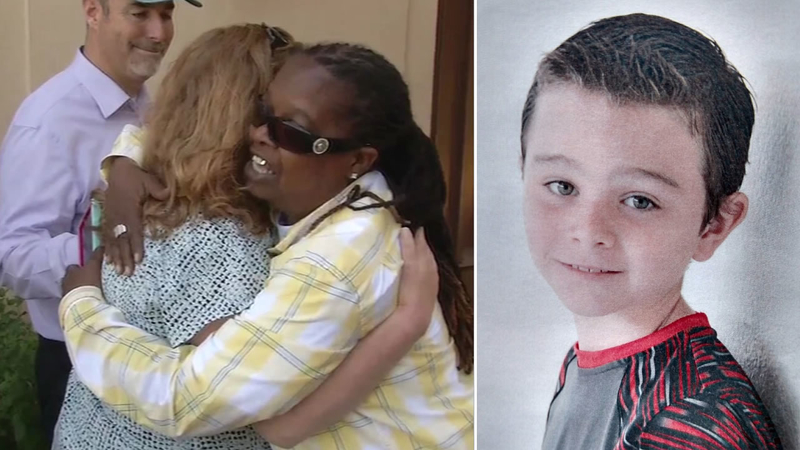 CONCORD, Calif. (KGO) -- Zachary Jordan-Smith, an 11-year-old boy with autism, walked out of class on Friday and hopped a BART train to San Francisco. He's now been safely reunited with his family because of one woman's instincts.

From noon until about 2:30 p.m. on Friday, Holbrook Elementary School was host to nervous parents, police officers, and teachers.

But at 2:30 p.m., just as ABC7 News was about to interview a Concord police officer, SFPD sent the word that Jordan-Smith was found.

He was found in the 900 block of Ellsworth in San Francisco in front of a head start school.

Somehow he squeezed through a fence at Holbrook and took a path to the North Concord BART station, which is nearby, and managed to get on BART train without money.

Fortunately, he was found safe.

"I want to go get my son," his mother, Christine, added.

Allison Caruthers found Zachary Jordan-Smith. She watches as His parents pick him up from an SFPD station. pic.twitter.com/38f1TpCBOb

That's exactly what the Jordan-Smith family did. They got in the car and drove to Concord, bound for San Francisco.

Jordan-Smith was found next to I-280 by a woman who held him there for police and the first officer on the scene happened to be a family friend.

There were hugs and happiness all around.

"I said, 'Lord, give me favor right now. Clear this freeway so I can get this kid.' I said, 'Are you lost?' and he said, 'Yes I'm lost.' I said, 'Where do you live?' and he mentioned a street I've never heard of. He mentioned Concord and I said, 'Concord, how did you get here?' He said, "BART,' so I said, 'Oh, so you're missing. I'm going to get you safe and I promise you I'm going to get you to your parents," San Francisco resident Alice Caruthers said.

Jordan-Smith is on the autism spectrum. He's part of a program at Holbrook Elementary School and now school officials are trying to figure out how he managed to slip out of school without being noticed until he got on the other side of the fence, onto BART and into San Francisco.