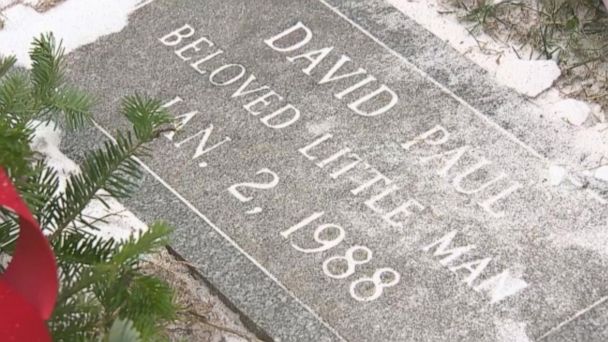 On a cold January day in 1988, an unidentified baby was found dead in a Connecticut parking lot.

Now, thanks to DNA technology, the baby's mother has been identified -- and she told the officers she waited 32 years for them to knock on her door.

On Jan. 2, 1988, the body of an unidentified newborn boy was discovered in a parking lot in South Meriden, according to the Meriden police.

He had died of exposure to the frigid temperatures, police said.

The Meriden Police Department gave the little boy the name "David Paul." Each year, officers would gather to hold a grave-side ceremony in his honor, said Meriden Police Chief Jeffry Cossette, who was a Meriden detective when the baby was found.

For years, the police department tried to identify the baby and his mother.

"This was one of the first cases to go on GEDmatch in 2017," Dr. Colleen Fitzpatrick, a forensic genealogist who worked on the case, said at the news conference. "We put DNA on GEDmatch. We get a list of DNA cousins ... and without contacting anybody, we figure out who they are and we start building the family trees."

"It's been a long haul since then ... putting that genealogy together," Fitzpatrick said.

In November 2019, a team of genealogists found a distant match to the mother. With that information, police started to find female relatives who lived in the neighborhood where the baby was found, Cossette said

Roche told the officers "she'd been waiting 32 years for the day" when "police would be knocking on her door regarding this incident," Cossette said.

"She communicated that she had a lot of remorse," Cossette added.

Roche was 25 years old in 1988 and told officers she delivered the baby herself at home, Cossette said. Roche claimed no one knew she was pregnant and she hid her bump under loose clothing, Cossette said.

Roche said she was "in a very bad state of mind at the time," according to Cossette.

Roche told the police she left he baby at the base of a tree on Dec. 28 and called the South Meriden fire department to report that there was something they needed to look for in the parking lot, Cossette said. She was "vague" with the information, Cossette said.

The baby was left in a spot not easily visible, so responders never found him, Cossette said.

Roche is not expected to face charges, according to police.

Cossette said he believes manslaughter is an appropriate charge, but the statute of limitations has passed.

While there's no statute of limitations on murder, Cossette said "the difficult element would be to prove the intent to commit murder."

Police do not believe the baby's father "knew anything about it," Cossette added.

The first Safe Haven law was enacted in Texas in 1999, and since then all states as well as Washington, D.C., and Puerto Rico have passed Safe Haven legislation, saving over 4,000 babies, according to the National Safe Haven Alliance.

Safe Surrender or Safe Haven laws differ by state, including how much time after birth a parent or guardian has to surrender the child. In 32 states, parents or guardians have 30 days to relinquish the child, Damien Johnson, director of communications of the National Safe Haven Alliance, told ABC News last year.

Laws also differ on which locations are considered safe havens. In every state, a hospital is a safe location. Some states also allow a child to be taken to a fire station or police station, said Johnson.

You can reach the toll-free crisis hotline at 1-888-510-BABY or get information on your state by clicking the map here at nationalsafehavenalliance.org.