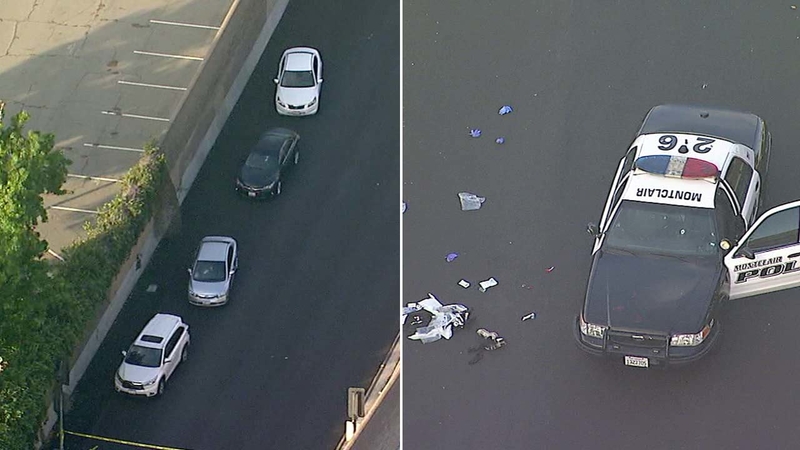 MONTCLAIR, Calif. -- Police shot a man suspected of assaulting a resident in Upland and also throwing rocks at multiple cars - including a police vehicle - in San Bernardino County's Montclair.

It all started early Wednesday morning when Upland police responded to a report of an individual who was acting strangely and swinging a stick, Montclair Police Department Chief Robert Avels said. That suspect was taken to a hospital for medical treatment, Avels said.

That same individual left the hospital, then entered a home in Upland and assaulted a resident there, according to investigators. As police tried to apprehend him, he escaped.

RELATED: Man in car killed by boulder dropped from Pasadena overpass onto 134 Freeway

The suspect later turned up in Montclair, where he was allegedly throwing rocks at passing vehicles around 5:45 a.m. At least seven cars were damaged, police said.

"Some have severe windows smashed to the passenger door windows as well as the windshield," Avels described. It was not known if any occupants of the vehicles were injured.

Among them was Rigo Garcia, who was on his way to work in his Toyota Camry.

"I stopped so he could cross," Garcia said of the suspect. "But then he saw me and he threw a rock at me -- and I tried to go around him."

Another driver, May Utaranart, said the man also threw rocks at her car.

One of the rocks shattered her windshield, she said, "and then he kind of blocked me out on the ramp, so he threw another two on my side window. And when I was able to make that turn, to park my car on the ramp, he got my back window."

Two Montclair police officers responded to the scene, where one of their vehicles was also struck by rocks.

The officers opened fire, striking the suspect, who was transported to a hospital for surgery, officials said. His condition was not immediately known.

Police shut down the eastbound on-ramp to the 10 Freeway at Central Avenue due to the investigation.