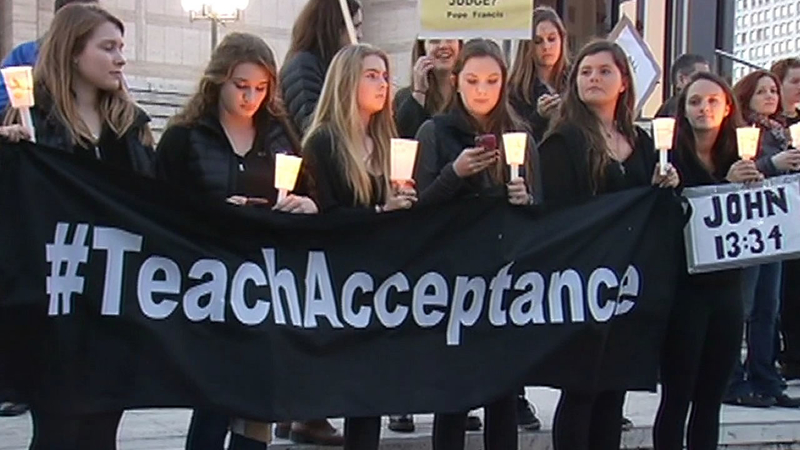 Hundreds gathered outside Saint Mary's Cathedral in San Francisco Wednesday night for a vigil to protest this controversial move.

Sutton stood on Gough Street holding a list of why she's proud of her Catholic education, but many are not proud of what they call discrimination against teachers.

"We ask the archbishop to stop this effort which is harming our children," parent Kathy Curran said to the crowd.

Parents and students lit candles in solidarity with Catholic school teachers who may be required to sign morality clauses, which condemn homosexuality, same-sex marriage, birth control and artificial insemination.

Mary Albaugh teaches high school. She told ABC7 News, "Our contracts (already) ask us to be people of integrity and to honor the Catholic faith and we do. What is the problem here? It makes me nervous."

"It makes the church seem like it's pushing away its people," student Gus O'Sullivan said.

"It's totally unfair and it impinges on their personal life," Tom Brady, Sr. said. "And he doesn't have the right to do that."

Archbishop Salvatore Cordileone says it's about staying on message with the church.

"The intention is certainly not to pry into the private lives of the teachers," Cordileone said.

"We're allowed to standup for -- if we're allowed to use this term -- our product. And just as someone who works for Coca-Cola can't expect to go into work each day with a can of Pepsi in their hand and sing the virtues of Pepsi," Father John Piderit, S.J., of the Archdiocese of San Francisco, said.