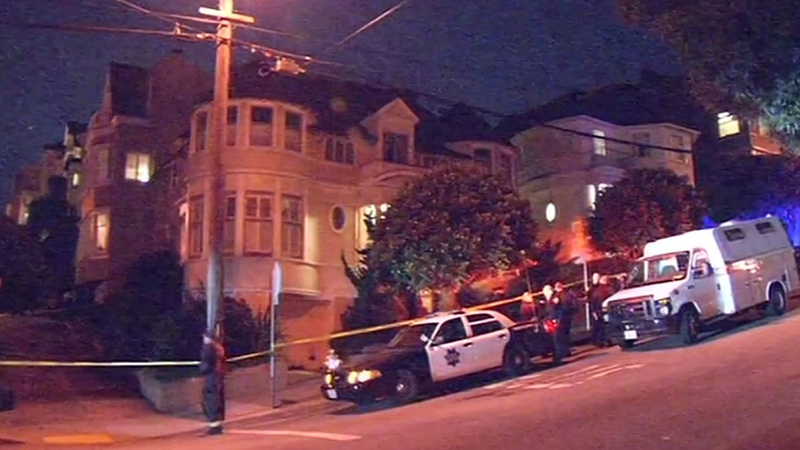 SAN FRANCISCO (KGO) -- Monday night there was a suspicious fire in San Francisco at the iconic Mrs. Doubtfire House.

ABC7 News was first on the scene and spoke to San Francisco police who said the house was indeed the target of an arson attack. There are visible burn marks on the garage door and on the front door as well.

Police say the arsonist used gasoline to start the fire. It happened around 8 p.m.

The owner of the house, which was featured in the 1993 movie "Mrs. Doubtfire" spoke to investigators outside.

He is a doctor who police say has had on ongoing issue with a former client. They suspect that client is responsible for the attack on the home Monday evening.

SFPD says the homeowner put out the fire after smelling smoke.

It was only five months ago when hundreds of people converged on the property at Steiner and Broadway to drop off flowers after news of Robin Williams' death was made public.

For days, mourning fans came to the house to grieve and pay tribute to the actor who played Mrs. Doubtfire.

ABC7 News spoke to a tourist from Indianapolis who drove by the house Monday night to check it out. He was surprised to see all the police cars.

"I think it's sad that kind of a monument like that's involved in something like that because people do come, people come to see it. Kids come to see it. That's why we're here," tourist George Gieger said.

Last we heard, police have not made an arrest. They say it's an issue of getting the suspect's name and tracking him down.

ABC7 News reporter Lilian Kim was the first TV reporter on the scene. Here are some of her tweets:

Investigators at the #MrsDoubtfire House. SFPD says someone tried to set it on fire. #mapit pic.twitter.com/m5F0e5oFbM

Burn marks are visible on the garage door. #MrsDoubtfire. pic.twitter.com/1XRBkpi8Ae

SFPD believes the homeowner's former client is responsible for trying to set the #MrsDoubtfire house on fire. pic.twitter.com/WGI9xl48V2