The company, which opened in 1979, will now sell its products online. "We've touched a lot of lives with a silly little sticker."
KGO
By Liz Kreutz 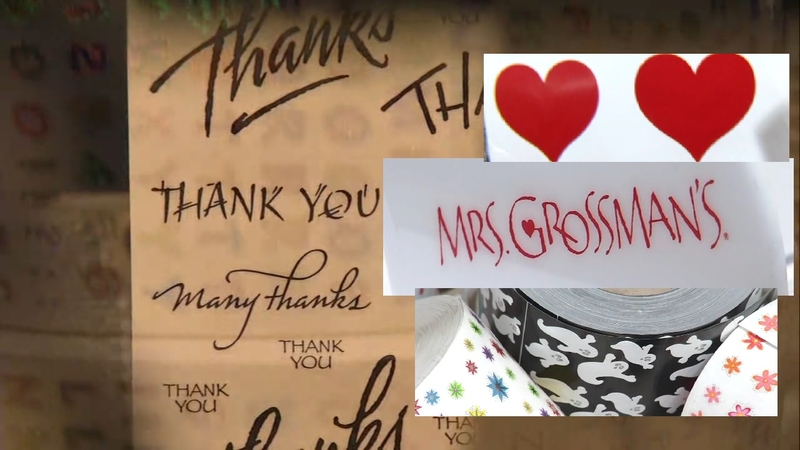 PETALUMA, Calif. (KGO) -- For more than 40 years, Mrs. Grossman's Paper Company has been manufacturing stickers in the Bay Area, but is now moving out of California.

Its warehouse in Petaluma, where the company has been for nearly three decades, was a bustling, colorful factory that up until 2019 offered popular tours for children.

But on Wednesday, the walls of the warehouse are bare and the printing machines quiet. The company has announced its downsizing, ending all wholesales and moving the business out of state to Utah.

END OF AN ERA: Beloved @MrsGrossmans sticker factory in Petaluma has announced they’re moving their business from California to Utah. 🙁

The company began in 1979 & has been in this warehouse since 1995. They’ll still sell stickers online but have ended all wholesale operations. pic.twitter.com/yiej7qyMPV

Mrs. Grossman's Sticker Factory in Petaluma is shutting down tours and its retail store after 20 years.

"It's extremely sad that we're closing up," said Jason Grossman, the company's owner and president, told ABC7 News as he packed up boxes of stickers. "I mean, we've been an institution here forever."

Jason's mother is Andrea Grossman, the original Mrs. Grossman, who founded the company in 1979. He said the challenges they faced as a small business during the pandemic were the final straw for the company, which had already been struggling due to competitors selling cheaper stickers made in China and, of course, so much of life going digital.

"The pandemic changed things," Jason said. "I just found moving out of this state easier for business and I need everything easier now, I'm getting old."

He explained that many of the stores they typically sold to had also been struggling amid the pandemic, and thus had not been not purchasing as much inventory. The company will now solely sell their products online.

Jason Grossman, @MrsGrossmans president, says the challenges they faced as a small business during the pandemic were the final straw. They’d already been struggling due to competitors selling cheaper stickers made in China and, of course, so much of life now digital. pic.twitter.com/ihRFeFpKYt

It's a sad decision for many of their longtime, loyal customers, including Michelle Leopold, the owner of Standard 5&10 Ace, a mom & shop in San Francisco that's been open since 1939.

"We were one of Andrea Grossman's very first customers," Leopold told ABC7 News. "We are very sad to see Mrs. Grossman's go."

"She came into the store with a roll of, I believe, heart-shaped stickers and said, 'Ok, here's a crazy new product. Do you have interest in selling this at the 5&10?" Leopold recalled. "And my father-in-law, who also took chances with BIC pens and hula hoops, said, 'Yeah, let's give it a try.'"

The rest, as they say, is history. Since then, Jason Grossman said the company has calculated they've printed enough stickers to go around the world.

"We've touched a lot of lives with a silly little sticker," Jason said. "It's amazing how much it attracts people and how much they love it and adore it."

RELATED: Despite some companies leaving, California set to remain as tech capital

Leopold said, while there are other stickers Mrs. Grossman's are a cut above the rest.

"They're just so innovative and fun and whimsical," Leopold gushed. "No matter what category you're looking for, from pirates to sloths, you're going to find a sticker that fits."

And that's the thing about Mrs. Grossman's stickers. Even though times have changed -- with more people likely now using emojis rather than pasting a sticker on a handwritten card -- these little pieces of art are timeless, and beloved regardless of age or generation.

And Mrs. Grossman's will keep going. Just, in a sign of the times, only sold online.