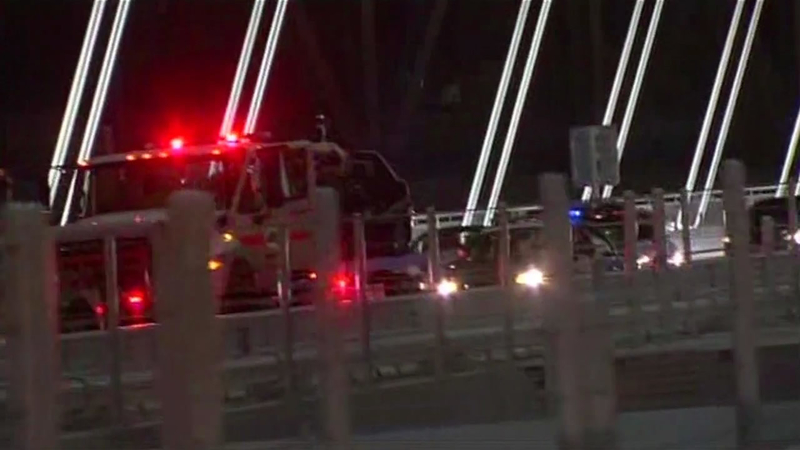 SAN FRANCISCO (KGO) -- The CHP says a woman who officers believe caused a four-car crash after driving the wrong way on the Bay Bridge has been arrested on a charge of DUI.

The accident happened just before 8:30 p.m. on Saturday. Authorities say 32-year-old Karrie Lyn Morgan of Vacaville was driving toward San Francisco going westbound, but in the eastbound lanes.

According to the CHP, Morgan entered the freeway from the toll plaza, collided head-on with a vehicle, and sideswiped two other cars.

"Wrong way drivers are more common than people realize," said CHP spokesperson Officer Daniel Hill. "But typically what happens is the driver realized their mistake, stops and corrects the error. It's very rare that we see a situation where a driver continues driving."

Hill says Morgan and three others were transported to San Francisco General Hospital for treatment. One person suffered major injuries, while the suspect and another suffered minor injuries.

All eastbound lanes were closed for about 15 minutes for emergency crews to access the crash site and two lanes were reopened to traffic before the scene was reopened around 10:15 p.m.

In two hours the lanes were back open, but traffic on Saturday night was horrendous. The lower deck of the Bay Bridge basically turned into a parking lot.

Drivers got frustrated and some tried to back their way off the on-ramp at Bryant and Interstate 80 onto surface streets. One of those cars nearly caused another accident.

Eventually, drivers slowly and patiently inched their way onto the bridge.

Police say there were no incidents once traffic started moving again and praised drivers for keeping their cool.