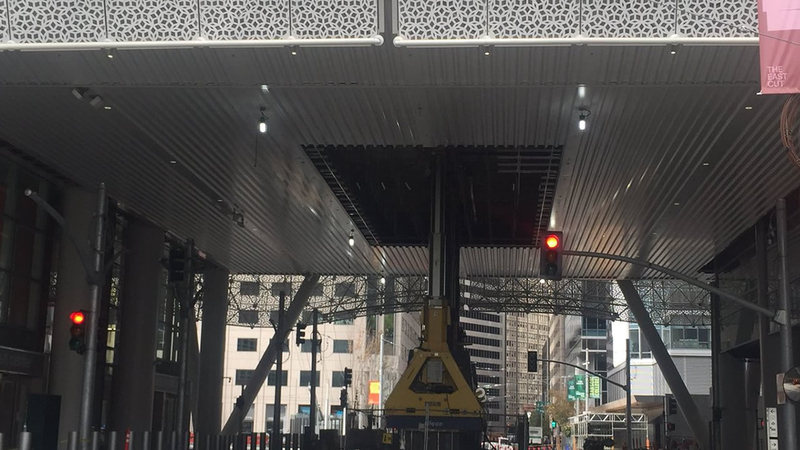 Yellow and Blue Jacks installed over the weekend are providing the initial stabilization for the Salesforce Transit Center.

"These jacks were brought in to just ensure that the bus deck was secure until we could get the actual shoring system that we've been in the process of designing right now and getting a peer review for," said Dennis Turchon, Senior Construction Manager with the Transbay Joint Powers Authority.

Officials say that the shoring system will likely be a series of towers and columns that will obstruct a portion of Fremont Street, reducing the number of lanes available.

"It's 10 feet wide what you're looking at, and then we will have what you call K rail, which is a concrete barrier that will protect this shoring from any traffic so that will give you a width of 14 feet for this shoring system," said Turchon.

The Transbay Joint Powers Authority says it will unveil renderings of the shoring system at a meeting Tuesday morning.

TJPA says goal is to have Fremont Street open by October 12th. pic.twitter.com/xf5ZmalESJ

TJPA was reluctant to give a definitive time frame for when Fremont Street or the Salesforce Transit Center will reopen, saying only that it won't be this week and that they're hopeful to have Fremont Street re-opened by October 12th.

"We're talking about over $2 billion spent on such an incredible beautiful place, and it's an unfortunate setback but I'm really confident in the engineers and the folks who are working to address this," said Mayor Breed.

The permanent fix will not entail replacing the beam.

"The fissure is only in a very localized area," said Turchon.

TJPA says it's more likely that steel would be added to it.

These jacks are temporary. A shoring system has yet to go into place. That will also be temporary. Eventually there needs to be a long term fix. Replacement of the beam is not a likely option because the problem is so localized. pic.twitter.com/B2oKnvNc7E