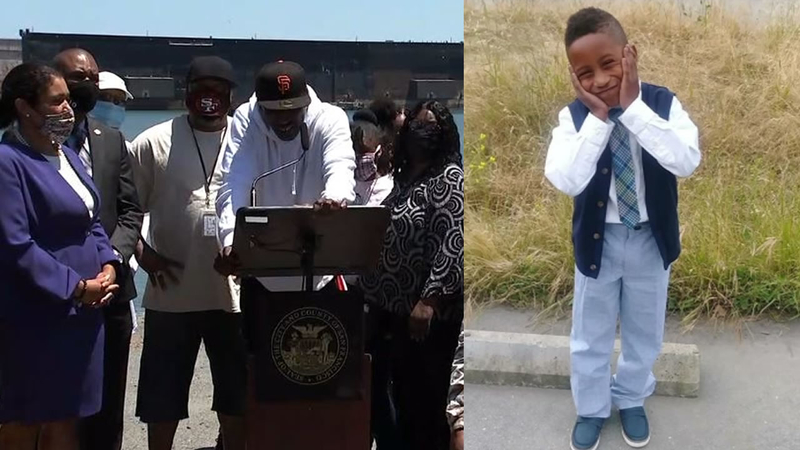 'My son mattered': Father of 6-year-old boy who was fatally shot in SF pleads for justice

SAN FRANCISCO (KGO) -- The family of 6-year-old Jace Young who was shot and killed while watching fireworks on July Fourth in San Francisco's Bayview neighborhood is asking for justice.

Mayor London Breed and Supervisor Shamann Walton joined the family of Jace Young on Tuesday to speak out on the fatal shooting.

Jace was the "perfect child," according to his aunt Ayofemi Bryant.

Mayor Breed pleads, "No more funerals, no more death, no more destruction in the Black community. We have a chance to do something different."

"Where is the outrage? If this boy was not Black, it would've been a whole other story. Let's remember that when we talk about Black Lives Matter, this boy's life mattered," Breed added.

Devastated, the Bryant family says Jace was watching fireworks with his sister at a birthday party in the Bayview when a bullet hit his body.

"Whoever did this to him we need justice. We need somebody to speak up. If you heard something, we need them to tell," said Bryant.

SFPD responded to the scene in Ingalls Street at 10:45 p.m. Saturday.

"We been scouring the neighborhood for eyewitnesses, video surveillance, and anyone who might have information regarding this incident," said Officer Robert Rueca.

Officers located a second victim, a 39-year-old man, at the scene who was transported to the hospital for non-life-threatening injuries. They believe this was a targeted attack.

"We don't have any indication that this was celebratory gunfire that some people witnesses during July Fourth. We believe this was targeted not toward the 6-year-old boy but we believe this was not random," said Officer Rueca.

Jace Young was the youngest of four and his dream was to change the world with technology.

"He was the most perfect child. He was so sweet. He loved to read. He loved computers. He just loved learning," said Bryant.

RELATED: 'We had M-80s shot over our heads,' SF firefighters respond to hundreds of fires caused by illegal July 4th fireworks

No arrests have been made and no description of a suspect is available at this time. SFPD is asking for the public's help.

"Our investigators are working tirelessly since the inception of this incident and we won't stop until we have someone in custody," said Officer Rueca.

Jace Young's family has set up a GoFundMe account to raise fund for his funeral.

The SFPD Crime Lab is conducting an expedited forensic examination on several pieces of evidence recovered during the investigation and investigators are continuing to secure surveillance footage from the area.

.⁦@SFPD⁩ investigators comb a hill near where 6 year-old Jace Young was shot. They were searching for evidence including casings. #JusticeforJace pic.twitter.com/l2oUFPxIyM