LAKE BERRYESSA, Calif. (KGO) -- More than a half dozen homes were lost in the neighborhood of Berryessa Highlands on Saturday when a fire broke out near Lake Berryessa in Napa County.

Even as firefighters began making progress on the Steele Fire, the apocalyptic nature of the inferno was taking its toll.

"I've never seen it like this before. It's like here we go again," said resident Stu Williams. Despite mandatory evacuation orders, he stayed behind to protect his home. His house is still intact but seeing part of the neighborhood in flames is devastating.

"This is a small community. We know pretty much know one another," Williams said.

A total of 8 homes in the area were damaged or destroyed in the fire. The blaze broke out around 4:30 p.m. on Saturday.

RELATED: PG&E may cut electricity during high fire danger, are you prepared?

Emergency crews rushed to put out the flames, attacking it from the ground and air.

"We were able to get enough firefighters in here and aircraft quickly to hold it to that number, even though one structure is too many," said Cal Fire Division Chief Mike Wilson.

Eerie scene of burned homes near Lake Berryessa due to #SteeleFire. Multiple structures burned to the ground. @abc7newsbayarea #abc7now pic.twitter.com/IlQL1mrEph

Around 300 Residents of Berryessa Highlands and Pleasure cove were forced to evacuate.

"Just my kids, just my pets, didn't care for nothing else," said evacuee Christie Sanford. "It was really close. I don't know if my house is there."

The cause of the fire is still unknown but the extreme dry brush and heat helped fuel the conditions.

"We're accustomed to it. It is the new normal but growing up here you know this is what you get," said evacuee Chloe James.

Part of the lake had to be closed off during the fire suppression, which meant boaters had to pack up and leave.

"It's a bummer but I feel sorry for the people who have lost homes more than anything," said Susan Jobe, who was vacationing with her family from Marin.

As of Saturday night, 150 acres had been charred and containment was at 10 percent.
Mandatory evacuations have been ordered for Berryessa Highlands, for Steele Canyon from Rimrock to Headlands Drive. Click here for more.

What to know about PG&E power shutdowns
FIRE 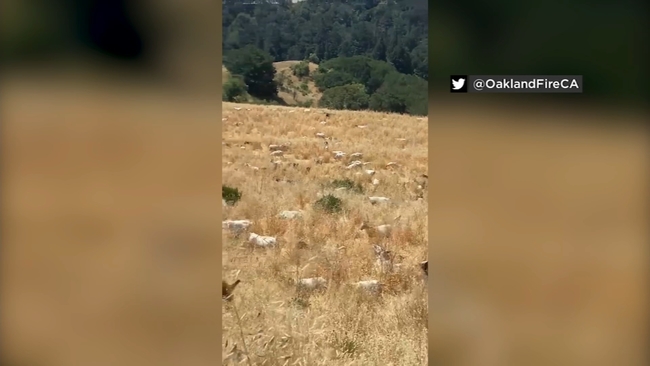