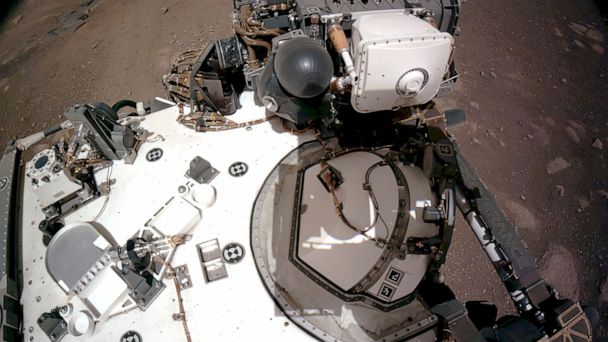 The footage, shot from multiple cameras, captures the rover's entry, descent and landing on the red planet's Jezero Crater on Feb. 18.


"This is the first time we've been able to actually capture an event like the landing of a spacecraft on Mars," Michael Watkins, the director of NASA's Jet Propulsion Laboratory (JPL), said in a news conference Monday, adding that he hopes the video will bring viewers along on the journey.

Watkins quipped that the team "binge watched" the new videos over the weekend, saying, "if you can call a one-minute video binge watching, but we watched it many, many times and it's really fantastic."

After unveiling the new footage at the news conference, Watkins said it "gives me goosebumps every time I see it."

The video captured the entire descent onto Mars, from the parachute inflation to its ultimate touchdown in the Jezero Crater. NASA said five cameras on three different parts of the spacecraft collected the imagery.


NASA also released imagery on Monday that features the 360-degree views from Perseverance of Mars' landscape.

Finally, NASA released the first audio recordings of sounds from Mars, which picked up both mechanical noises from the rover but also the utterances of a Martian breeze.