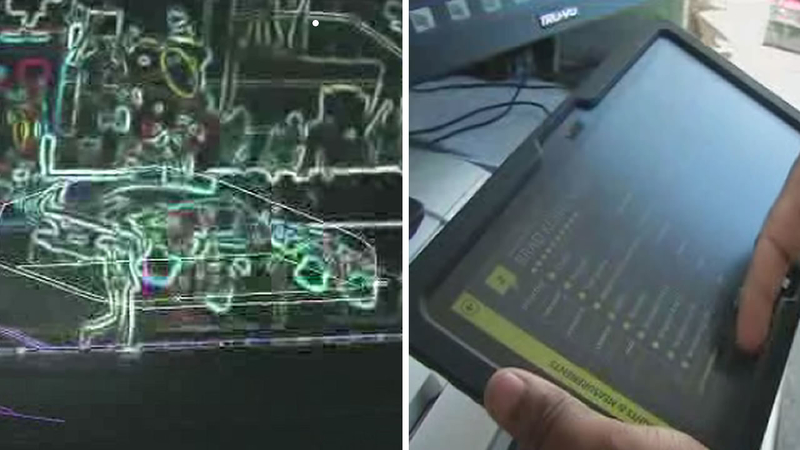 SONOMA, Calif. (KGO) -- If you ever thought the officials at a sporting event needed their eyes checked, you'll be happy to hear this. The officials there are gearing up to use lasers and computer vision to take the guess work out of this weekend's big NASCAR event in Sonoma.

Sonoma Raceway's infamous turn two has ruined its share of tires. It's a good thing there are lots of spares coming from the pit crew. This year, when the crew jumps over the wall for that pit stop, about 50 cameras will be watching.

"How many tires were changed, how many cans of fuel they took, whether there was a chassis adjustment done," Chad Little, NASCAR's inspections & officiating director, said.

Officials who used to stand on pit road now sit in a trailer. The tech trailer is said to have nine million times the computing power of the first space shuttle.

"There's the same amount of air conditioning as four houses -- and here you can see all of the servers down here are all of the vision processing servers," senior pit road officiating technician Stephen Dwyer said.

They can track the car, the crew members, and even the tires to alerting officials if they break the rules.

"The system has said, 'You potentially have a penalty for driving through too many boxes on entry,' and it alerts the official in red," Little said.

Setting it all up takes some serious math.

"We can actually take the mean averages, and use Pythagoras to work out the various triangular shapes," Dwyer said.

But now, you can't really question those calls.

"The video will show us whether the crew members' foot was on the ground or not," Little said.

But the high tech officiating actually starts long before the race at NASCAR's laser inspection station, where they've traded clipboards for computers. The computer measures the car against the official rules and, for the first time, stores the records digitally.

"It will help us to see and track vehicles from race to race, without having a lot of paperwork to shuffle through," Little said.

The inspector marks off a checklist on a tablet. And yes, that all-important inspection sticker, is still made out of paper.