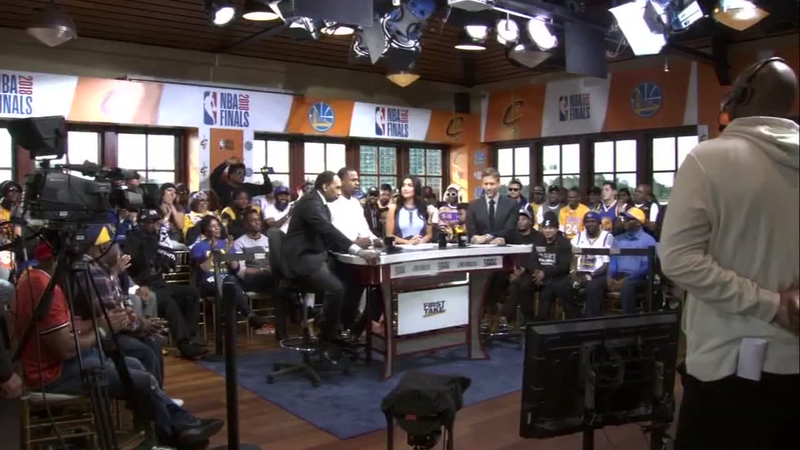 Warriors fans getting ready for Game 3 of NBA Finals

OAKLAND, Calif. (KGO) -- The Golden State Warriors will be shorthanded when they try to defend home court tonight at Oracle Arena.

Head coach Steve Kerr says Kevin Durant will not play tonight. Center Kevon Looney is out for the remainder of the series. The best of seven series is tied at one game apiece.

Klay Thompson is questionable with an injured hamstring, although he is optimistic about playing. The star points out that he had a sprained ankle last year during the Finals.

"Well, last year, I think I was in a much worse position than I am now, which is good. So, that's a good sign. I mean, injuries are never fun. It's the most unfortunate part of sports. But, it tests your character and you know playing through pain makes it all worth it in the end," said Thompson.

The Dubs are fired up about being home, saying they understand how special this is. Tickets for tonight's game are sky high; one season ticket holder has listed their seat on the 14th row for sale for $101,000 -- the next most expensive seat is $68,000.

Dub Nation stood in line early this morning, and even overnight, to get into the studio audience for the ESPN show "First Take". The show was broadcast from Oakland's Lake Chalet restaurant this morning.

"The show was wonderful! I was here last year too. It is the most fun ever. And you know we love the Warriors," said Oakland resident Joyce Hawkins.

Some in the audience said they got in line yesterday for a bracelet to get in to today's show.

"Yesterday I had to be here at 2 a.m. I heard someone was here at 11 p.m. last night! They didn't have a wristband. It's all about the wristband so you don't have to stand in line," said TJ Hamilton.

Even though the Warriors are dealing with several injuries, fans said they are not worried.

"I will be at the game and the Warriors will win of course. It doesn't matter about the injuries we have. It's the heart of our team. It's the spirit of our fans. It's the enthusiasm with which we play with. We have a will and a desire to win," said fan Wendell Clark.

Jayme Lopez is also going to the game and will be on the look-out for rapper Drake, a Raptors fan known for smack talk.