Neighbors had concerns about SF building that burned

KGO
By by Melanie Woodrow
SAN FRANCISCO (KGO) -- A morning fire at Sanchez and 18th Street in San Francisco is calling into question whether city officials did enough following years of complaints by neighbors.

Firefighters say the two-alarm fire came with a lot of challenges, including the construction of the building which had no fire stops in the walls.

Neighbors say they heard an explosion.

"It sounded like a truck dropping on the ground," said Peter Woulfe. "I knew immediately which house it was."

Woulfe and other neighbors say the house is plagued by troubles.

"We ... all have known that it's been a crack house for years," said Bruce Mishler.

That's something homeowner Joel Elliott, who bought the property in 1995, strongly disputes.

"That's a bunch of crap; that's a lie," he said. "I had some tenants who were problem tenants."

But Elliott's neighbors and the city disagree. The city attorney filed a lawsuit against Elliott for nuisances and safety dangers and in 2016 won a $1.7 million judgment against him.

"Took away my income, forced me into foreclosure, then into bankruptcy," said Elliott.

Elliott said there was no one living in the home when Friday's fire broke out. Damage, however, extended to a neighboring building.

Arson investigators and San Francisco police officers were on the scene, taking statement and even took pictures of Elliott's hands.

"It is odd that it caught on fire while the city was in the process of trying to seize it for all the violations that were taking place," said Supervisor Jeff Sheehy, who represents District 8.

Some wonder if the fire could have been prevented.

"We've asked the city over and over to do something about it, and now surprise, something finally happened," said neighbor Josh Bleecher.

Seconded neighbor Amy Dibenedetto, "It's a failure of so many systems."

There were no injuries in the fire. The cause of the fire has not yet been determined. 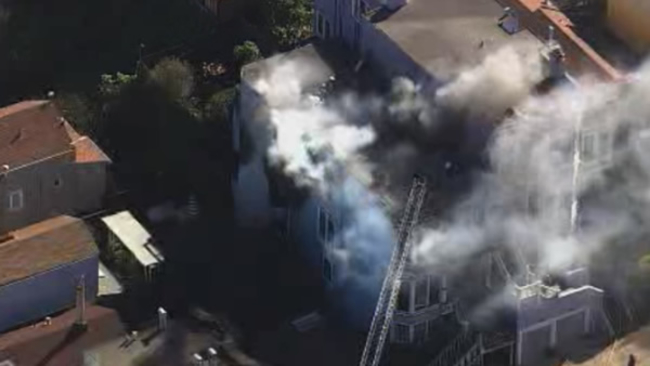