PALO ALTO, Calif. (KGO) -- The American Cancer society says lung cancer is the leading cause of cancer death among men and women, more than colon, breast and prostate cancers combined. Most cases affect older people. But a Stanford neurosurgeon, a non-smoker, who was diagnosed with stage four lung cancer at the age of 36 died Monday after a two year fight.

ABC 7 News anchor Cheryl Jennings talked with him before he passed away about his brave battle and the love that gave him the strength to make the most of every moment.

Lucy and Paul Kalanithi's life seemed perfect when they got married nine years ago. They were young and talented doctors at Stanford Medical Center. He was close to finishing seven years of training as a neurosurgeon, when he started having some alarming symptoms in May of 2013, starting with back pain, coughing fits and weight loss.

"More rapid weight loss, plus night sweats, plus chest pain," he said. "Had a scan and that identified that I had metastic lung cancer. My first thought was that I'd be dead within three months. The first thing I said to Lucy was 'You should definitely remarry and start up a life,' because it seemed like this life was over."

"It actually felt really loving," Lucy Kalanithi said. "Like, 'Oh, you just got this terrible news and the first thing you're say is something about my life."

Paul's doctor put him on the drug Tarceva. It was so effective for nine months, he was able to continue his work.

In the middle of all the turmoil, they made a major decision about their family.

"We talked about having a baby in the hospital too," Lucy Kalanithi said. "For me, I was worried that would make things harder for him, but that's been wonderful."

Their daughter Cady came into their lives July 4, 2014.

Just before Cady came along the Tarceva stopped working. Paul relapsed. He started chemotherapy, which made him very weak, but that didn't keep him from spending every spare moment with his little girl.

ABC7 News was with the Kalanithis at Stanford Medical Center in January when Paul was getting blood tests. They never saw stage four lung cancer coming. They weren't smokers, which can lead to lung cancer.

"For reasons we don't understand, a cell in the body develops a mutation in a particular gene and that mutation in that gene led to the cancer," said Stanford Medical Center Dr. Heather Wakelee.

That stage four lung cancer diagnosis turned Paul the neurosurgeon into Paul the patient with an uncertain future. He was determined to make the most of his time.

"Realizing there was a future, and there were decisions to be made about what I was and wasn't going to do," Paul Kalanithi said.

Lucy and Cady Kalanithi were the most important part of that future. He began writing about his battle with cancer and kept his lovely sense of humor.

"While you're bedbound, you can sit and type pretty easily, more easily than you can operate a surgical drill," he said.

The New York Times published his powerful article in 2014, entitled "How Long Have I Got Left?" Paul learned an important basic rule as a doctor, "Be honest about the prognosis but always leave some room for hope," he wrote in the op-ed.

His doctor did that for him and he cherished every day.
Every holiday took on even more meaning, like this past Thanksgiving when the couple's families gathered for prayer, food and comfort. 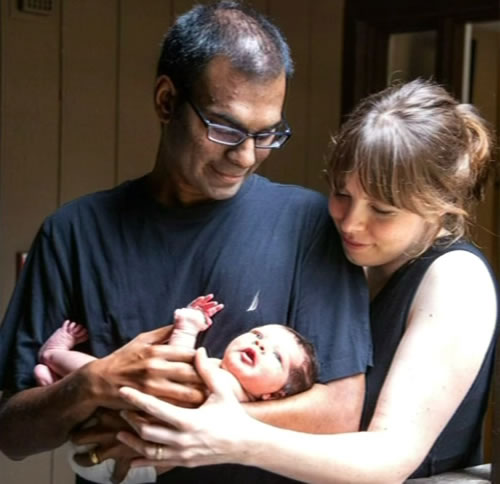 Paul and Lucy Kalanithi pose with their baby Cady.

Paul and Lucy began working with the Bonnie J. Addario Lung Cancer Foundation, to help them raise money and awareness about lung cancer and the need for more research and treatment.

And when Cady gets older, and learns about her dad, she will be so proud of him and his accomplishments.