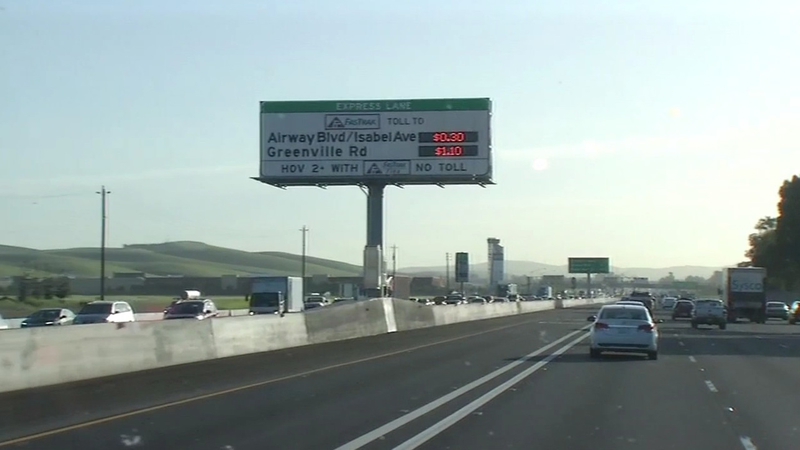 LIVERMORE, Calif. (KGO) -- It was smooth sailing Friday morning on eastbound 580 through Livermore. It was the counter commute so there really was no need to pay extra for the two new express lanes that opened today.

The two new express lanes on the eastbound side through Dublin, Pleasanton and Livermore just opened Friday morning for carpools and for solo drivers, who want to pay.

But first, you must have the new FasTrak Flex toll tag. It allows you to designate if you're driving by yourself or as a carpool with two people or carpool with three or more people.

Overhead signs will tell inform drivers of the current toll for solo drivers. Toll prices vary based on congestion and the distance you travel in the express lanes.

The express lanes will operate Monday through Friday from 5 a.m. to 8 p.m. The lanes are open to all vehicles at no charge on weekends.

The two express lanes may cut down on commute times. But the question is: are people willing to pay for an easier ride home?

Ana Blanca, a Turlock resident, she's she would probably pay to drive in the new lanes.

"Friday is usually pretty bad. Like today. Yeah, I probably would," she said.

One new express lane will open on the westbound side on Monday morning.

"If it's going to save me some time, why not?," said Muhammad Khan of Fremont.

The CHP says drivers should make sure to obey the rules because officers can tell what your FasTrak is set for. Switching it to a solo ride while they're pulling you over won't work.

Getting caught cheating in the express lane is costly. It's a $500 fine in Alameda County.

One westbound 580 express lane is scheduled to open up for the Monday morning commute.

How much to ride solo right now in EB 580 Express Lane? From Livermore Outlets-$.70 to Isabel & $1.25 to Greenville. pic.twitter.com/Yitl4uMWfC