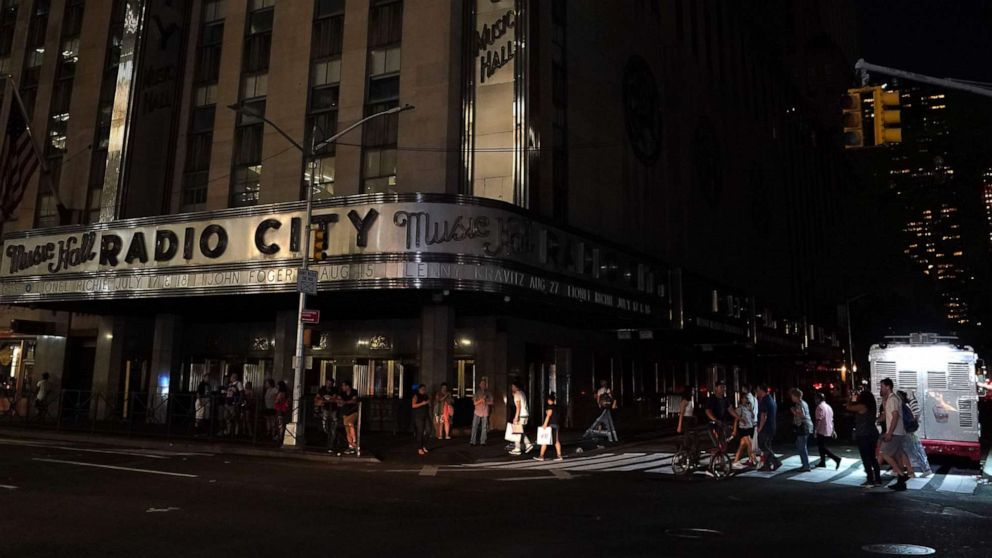 ABCNews
By EMILY SHAPIRO
New York City is facing "Russian roulette" with future power outages, the governor warned Monday in the wake of this weekend's massive blackout that left a swath of Manhattan in the dark.

"Blackouts cannot happen.They cannot happen in the city of New York and they can't happen for no reason," Gov. Andrew Cuomo told WNYC Radio's Brian Lehrer on Monday. "We were lucky that nobody died."

The five-hour long Saturday night outage impacted 73,000 customers in midtown Manhattan and the Upper West Side, trapping people in elevators and on subway trains, blacking out Times Square and leaving New Yorkers sweating in their apartments. All systems have since been restored.

While officials said no injuries or hospitalizations were reported, Cuomo called the blackout "a serious public safety risk."

A 13,000 volt distribution cable that failed at West 64th Street and West End Avenue was the first domino to fall in a chain of events that led to Saturday nights blackout, Con Ed is saying - after two days of downplaying its role in the outage

After investigating backwards, engineers have determined that the underground power cable failure, which some residents reported as a transformer fire or loud explosion, was the first in a series of events. But that did not cause the blackout.

Protective relay systems at the 65th street substation designed to isolate that fault then failed, Con Ed has determined, although the utility does not know why. That is the failure that led to the outage.

The failure spread the problem to the 49th street substation, where the relays operated as designed and stopped the outage from growing further

In all, six networks were taken out of service by the failure - either during a domino of cascading events or proactively by Con Edison, because they were about to fail

In a statement, Con Edison said it has identified the equipment that failed but has not said why it failed.

"The relay protection system at our West 65th Street substation did not operate as designed," the company said.

"That system detects electrical faults and directs circuit breakers to isolate and de-energize those faults. The relay protection system is designed with redundancies to provide high levels of reliability," ConEd said. "In this case, primary and backup relay systems did not isolate a faulted 13,000-volt distribution cable."

"The failure of the protective relay systems ultimately resulted in isolation of the fault at the West 49th Street transmission substation, and the subsequent loss of several electrical networks," the company said.

"We initially believed the 13,000-volt cable fault was unrelated to the transmission disturbance," ConEd said. "While the cable fault was an initiating event, the customer outages were the result of the failure of the protective relay systems. "

ConEd continued, "We have restored our system to its normal state to continue providing our customers with the high level of reliability they expect and deserve. Our analysis of data and testing of the relay protection equipment is continuing, and will provide more insight into why the system, and its multiple redundancies, did not operate as designed."

Cuomo told WYNC earlier Monday that he was launching an independent investigation.

"When I was there with ConEd once the power was restored, I debriefed and toured the facility.But I want an independent investigation to determine what happened," he said. "Because it can't happen again."

Cuomo said Con Edison was preaching patience after the blackout hit, but the governor said, "With public safety, we don't have to be patient, we shouldn't be patient."

"We need performance, we pay ConEd," Cuomo told WNYC. "When people get their bills, they can't say to be patient. This is a vital service they're providing. That's why they're regulated.That's why it's a public utility. If they do not perform, they can be replaced."

"ConEd has the attitude of too-big-to-fail banks," Cuomo continued. "This is a franchise, this is a license.This is not a God-given right, and if they don't perform well, they can be replaced."

As a utility in New York State, ConEd is regulated by state government.

"You have to be in charge wherever you are... I was in touch with my folks to make sure that things were being taken care of," the mayor told reporters on Sunday.

"I was waiting to understand what was going on," he said. "On a Saturday evening, it was a long travel so I couldn't make it back. As soon as it happened I was made aware of it and kept up to date. Once it was apparent the outage was continuing, I came back."