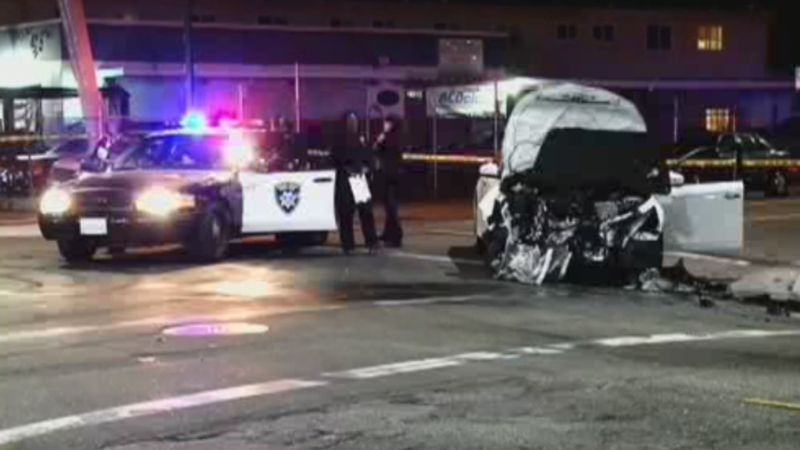 OAKLAND, Calif (KGO) -- A 19-year-old man is dead after being tossed from a speeding convertible in Oakland Saturday morning.

The driver and another passenger of the convertible in jail after they ran from the scene.

Police say the car sped through a red light and rammed another car, sending the woman who was driving that car to the hospital.

Oakland resident, Jorge Afanadoor, says he heard a loud crash after midnight, which instantly woke him up. "It was quite a big bang, I heard a bang and got up," said Afanadoor.

Officers in the vicinity of 106th Avenue and MacArthur Boulevard heard a collision nearby at 12:38 p.m. They found a Ford Mustang and a Nissan Altima had been involved in a collision.

The impact was so intense, it sheared off the front of the Nissan Altima and sending its 22-year-old female driver to the hospital.

Police say the driver of a Ford Mustang convertible was speeding, when it collided with the Nissan, which then became airborne. It landed on the front lawn of a nearby house. The 19 year old old passenger was ejected and died on impact.

The 22-year-old driver and another passenger took off and ran from police.

Neighbors say they see too many cars running red lights in this area. "You have to be careful when you walk around the area," explained Kathy Johnson, an Oakland resident.

Police say there was sideshow activity in the area before the crash, but they don't know if the Mustang took part.

The driver of the convertible was charged with vehicular manslaughter and felony hit-and-run. Alcohol appears to have been a factor in the collision.
Related topics:
oaklandhit and runopdhospitalfirefightersinvestigationpolicespeed limithit and run accident
Copyright © 2021 KGO-TV. All Rights Reserved.
TOP STORIES
53 cases of new R.1 COVID variant detected in CA
EXCLUSIVE: SJ man warns others after being harassed over dinosaur flag
Wiggins says he will stick to beliefs regarding vaccine
Breakdown of vaccine requirements for SF, Oakland city employees
COVID vaccine boosters now available in Bay Area
Steve Kerr reveals how his name made it in hit show 'Ted Lasso'
R. Kelly found guilty on all counts in sex trafficking trial in NYC
Show More
Pfizer to ask for approval of COVID vaccine for kids in matter of days
SF-based tech entrepreneur to go to space with Blue Origin
California to replace the word 'alien' from its laws
LIVE: Track temps, air quality around SF Bay Area
CA to mail every voter a ballot in future elections
More TOP STORIES News