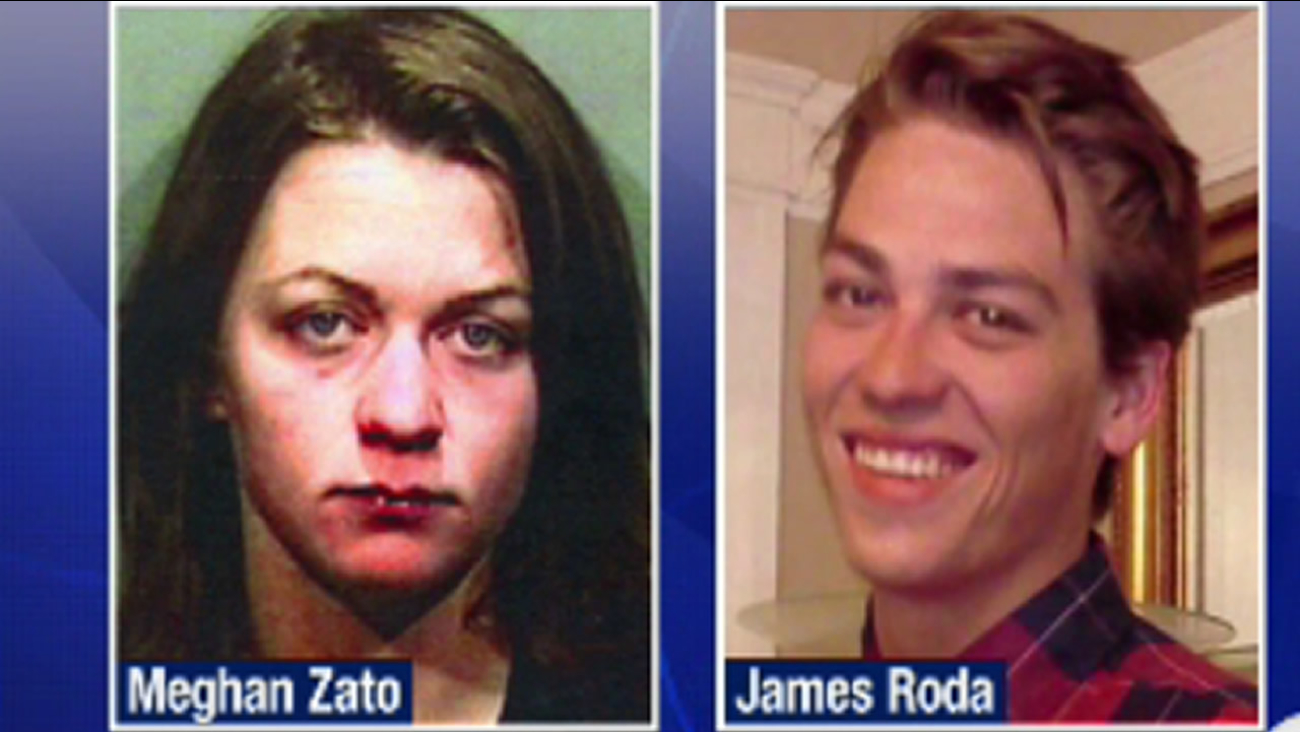 Meghan Zato, 28, was sentenced to 7 years in prison for injuring James Roda, 27, man with her car on a street outside a bar near Lake Merritt in Oakland in 2013. (KGO-TV)

OAKLAND, Calif. -- A former law student apologized for her actions today before she was sentenced today to 7 years in state prison for striking and seriously injuring a man with her car on a street outside a bar near Lake Merritt in Oakland in 2013.

Meghan Zato, 28, could have faced up to 10 years and eight months in state prison for her convictions for assault with a deadly weapon causing great bodily injury, two counts of driving under the influence of alcohol and one count of leaving the scene of an accident.

But Alameda County Superior Court Judge Allen Hymer said at a packed and emotional hearing that the maximum possible punishment wouldn't have been appropriate for Zato because "she has some things going for her," such as her academic achievements and her lack of a prior criminal record.

The charges against Zato stem from an incident in which she plowed into 27-year-old James Roda of Oakland with her 1984 Mercedes-Benz while he was in the middle of 14th Street between Madison and Oak streets shortly before 1 a.m. on Oct. 5, 2013.

Zato's lawyer, Megan Burns, said in her closing argument in November that Zato struck Roda under duress because she faced an imminent threat from a group of men who had beaten her and robbed her of her cellphone in front of the Oakland Public Library.

The confrontation occurred after Zato shouted at a group of people who were painting graffiti on the walls of the library, which is located across the street from the Ruby Room bar. Zato and Roda had both been drinking there that night.

Prosecutor Adam Maldonado said Zato had been kicked out of the bar because she was drunk and had confronted patrons who were playing pool.

Zato, who got a scholarship to study philosophy at the University of California at Los Angeles and then was a first semester student at Hastings College of the Law in San Francisco before working as a paralegal, testified that a mob blocked her car and she heard pounding on her trunk that sounded like a gunshot.

Burns, who asked that Zato be found not guilty of all the charges against her, said Zato "didn't feel safe and was scared out of her mind" and felt like she had "no other alternative in that moment" other than to speed away from the scene.

But Maldonado said the situation had calmed down and she had spent five minutes smoking a cigarette in her car before she sped off, quickly did a U-turn and hit Roda.

The prosecutor said Zato "knew exactly what she was doing" but "didn't care" if she hit someone.

Burns asked Hymer to place Zato on probation, saying that "except for the mob attack (on Zato) it's highly unlikely we would be here today" with Zato convicted of four felonies. She said she doesn't think Zato would re-offend.

But prosecutor Butch Ford said it's hard to guarantee that Zato wouldn't do the same thing again because "she displayed a lack of respect with everyone she interacted with that night."

Ford said Zato had the option of stepping away from confrontations that night "but every step of the way she made conscious decisions to take us down this path."

Roda, an Oakland man who was working as a server and a fry cook at an Alameda restaurant, had just come from the Ruby Room. He was hospitalized for six months with serious brain injuries that will challenge him for the rest of his life and is now legally blind. He also suffers from seizures and has memory problems.

Roda, who now works as a prep cook at Drake's Dealership in downtown Oakland, said after the hearing, "I'm glad that it's all over and I can get on with my life."

Arlene Barboza, Roda's girlfriend, told Zato at the hearing that, "Your actions have taken such a toll on James' family and especially on me" and "stolen precious moments from us."

Barboza said the crash has robbed Roda of "his sight, his health, his youth and most if not all of his memories, including those of me."

Barboza said Zato is "a cold-hearted soul with nothing to offer" and said she "never apologized to the man you almost killed."

But Hymer said he believes Zato is truly remorseful for her actions, recalling that she cried when Roda had a seizure in court during her trial.

Addressing Roda before she was sentenced, Zato said, "I'm sorry, I didn't mean to hurt you.