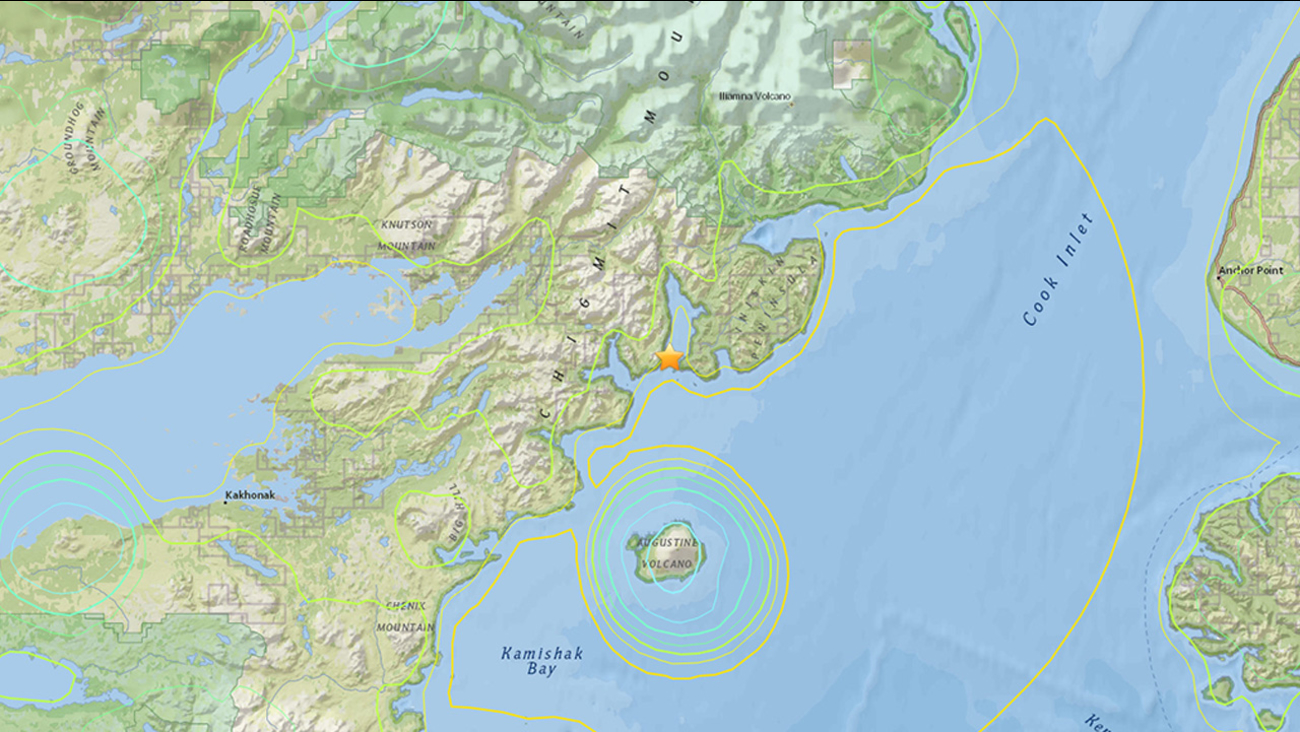 A 6.8-magnitude earthquake struck 53 miles west of Anchor Point in the Kenai Peninsula of Alaska Sunday, Jan. 24, 2016, according to the U.S. Geological Survey.

ANCHORAGE, Alaska -- A magnitude-6.8 earthquake knocked items off shelves and walls in south-central Alaska and jolted the nerves of residents in this earthquake-prone region. But there were no immediate reports of injuries.

The earthquake struck about 1:30 a.m. Alaska time and was centered 53 miles west of Anchor Point in the Kenai Peninsula, which is about 160 miles southwest of Anchorage, according to the U.S. Geological Survey. About two hours later, a magnitude-4.3 aftershock hit the Cook Inlet, the agency said.

The earthquake was widely felt by residents of Anchorage. But the Anchorage and Valdez police departments said they have not received any reports of injury or significant damage.

Vincent Nusunginya, 34, of Kenai said he was at his girlfriend's house when the earthquake hit.

"It started out as a shaking and it seemed very much like a normal earthquake. But then it started to feel like a normal swaying, like a very smooth side-to-side swaying," said Nusunginya, director of audience at the Peninsula Clarion newspaper. "It was unsettling. Some things got knocked over, but there was no damage."

The Alaska Department of Transportation reported on its Facebook page that there was road damage near the community of Kasilof, on the Kenai Peninsula.

The KSRM (Radio Kenai) radio station in the Kenai peninsula said that about 2:30 a.m. the Kenai Fire Department was on the scene of a gas leak and explosion at a home. Fire departments in Kenai, Anchorage and other communities were getting calls about the quake.

A dispatcher for the Homer police department, who declined to identify herself, said no one called to report broken gas lines or any significant damage, but many called to report feeling the strong quake.

The hashtag #akquake was trending early Sunday on Twitter, where people were sharing their experiences of the quake and posting photos of items that had fallen off walls and shelves.

A tsunami is not expected as a result of the earthquake, the National Weather Service said.
Related topics:
alaskaearthquakeu.s. & world
Copyright © 2021 by The Associated Press. All Rights Reserved.
More Videos
From CNN Newsource affiliates
TOP STORIES