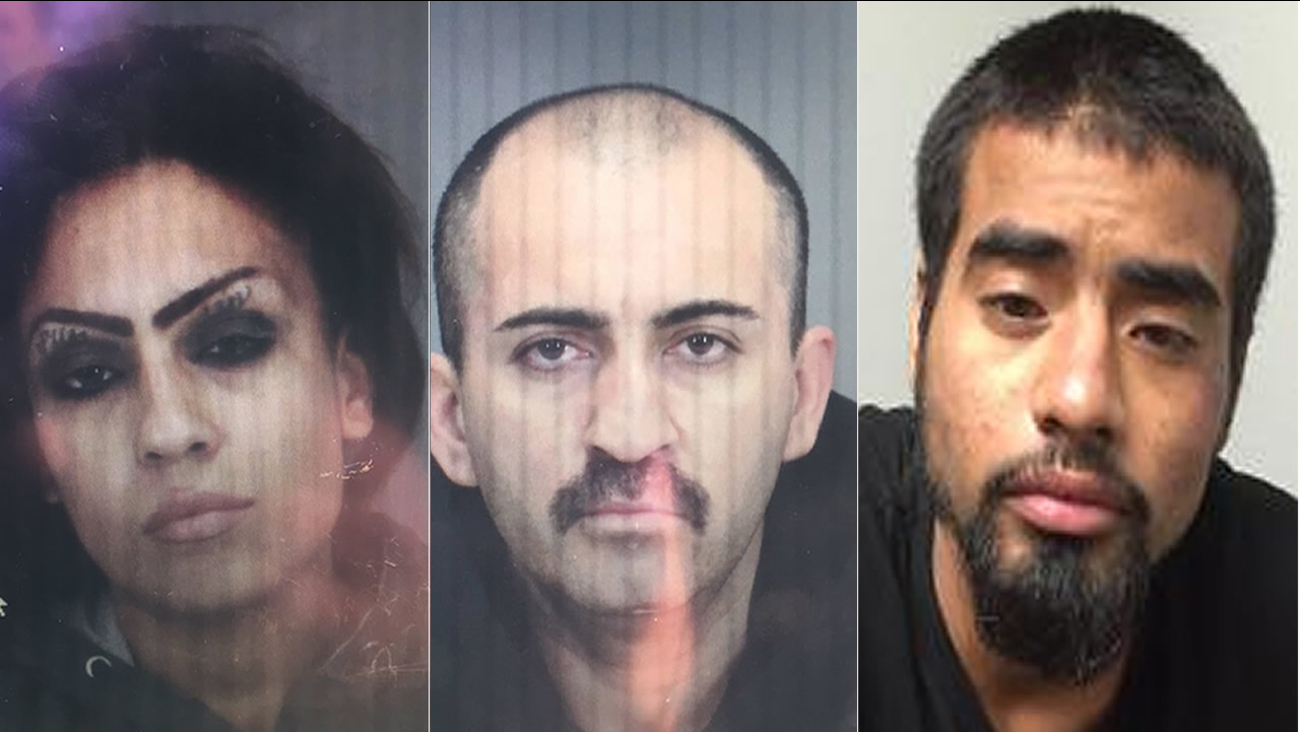 CAMPBELL, Calif. (KGO) -- Police are asking for the public's help to find a two suspects, one of whom, a female, stole a Campbell police vehicle and injured an officer Saturday morning. A third suspect involved has been apprehended.

The stolen car has since been located, but the search continues for Itse Murillo, 26, who allegedly fled in the patrol vehicle after struggling with an officer and dragging the officer with the car.

Murillo is described as a 5 feet 3 inches tall, weighing 110 pounds and with multiple face tattoos.

Police have identified another of the suspects as Christian Hernandez, 35, who is five feet eight inches tall and weighing about 170 pounds. He fled the scene on foot.

The third suspect is Anthony Reyes, 22, from San Jose. He i s currently under arrest for multiple charges including assault with a deadly weapon on an officer, possession of a stolen vehicle, burglary and conspiracy.

Just before 8 a.m. the Campbell Police Department received a report of a possible auto theft occurring in the 700 block of Sharmon Palms Lane. A secondary caller reported seeing suspicious activity, possibly related to the auto theft, in the parking lot of 2875 S. Winchester Blvd.

Upon arrival, Campbell officers located a silver Acura MDX and a white Acura Integra (the stolen vehicle from Sharmon Palms Lane) in the parking lot. The MDX accelerated towards the patrol car and intentionally rammed the front-end causing major damage and the airbags to deploy. Based on the severity of the collision, the Acura MDX caught on fire and needed to be extinguished by the Santa Clara County Fire Department.

At that point, Murillo, who was in the MDX, exited the vehicle and got into a Campbell Police patrol car that had been left unoccupied by an officer who had just ran to pursue one of the male suspects.

As she entered the patrol car and closed the door, the initial officer whose vehicle had been rammed, attempted to stop her. The female suspect accelerated the patrol car in reverse which caused the officer to be dragged a short distance and thrown to the ground.

She fled in the marked patrol car and was chased by another responding CPD unit until she was lost in the area of Prospect/Lawrence. The injured officer was taken to the emergency room for a head injury and multiple scrapes.

The male suspect who ran northbound on Winchester Blvd was apprehended and placed under arrest. His identity was not disclosed.

Officers are currently searching the area near W. Sunnyoaks Avenue and Virginia Avenue for the second male suspect.

The stolen patrol car was located in the area of Parkmoor Avenue and Meridian Avenue, at approximately 10:23 am. Officers have confirmed that all the weapons in the patrol car have been accounted for.

The Acura MDX that was involved in the ramming was confirmed to be stolen out of San Carlos. Evidence located shows that the suspects had been involved in multiple burglaries in the Los Gatos/Campbell area from earlier in the morning.

Investigators are currently following up on leads and we are asking for the public's assistance in providing information about the incident that occurred this morning as well as details on the suspects and their possible location.