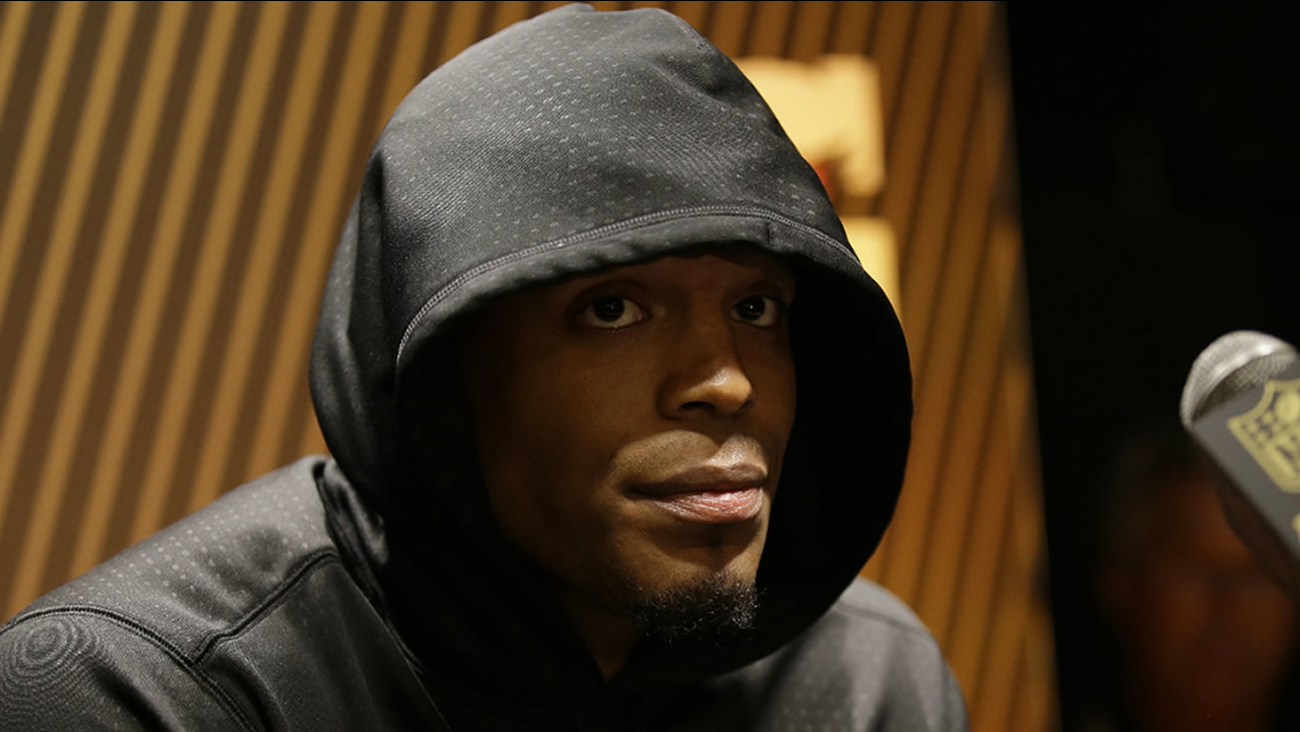 SANTA CLARA, Calif. (KGO) -- Carolina Panthers quarterback Cam Newton didn't get to dab during Super Bowl 50, and he didn't feel like talking after his team's 24-10 loss to the Denver Broncos.

The newly crowned league MVP walked out on reporters Sunday after answering only a handful of questions, mostly with short, soft-spoken answers. Some are wondering if comments from Denver Broncos cornerback Chris Harris contributed to his departure.

PHOTOS: Panthers vs Broncos at Levi's Stadium in Super Bowl 50

The disappointment on Newton's face was as noticeable as the lack of flair in his postgame attire. Throughout the season, Newton wore designer suits and sport coats, often with sequin-studded loafers, following games. On this night, he wore a black hoodie, with the hood pulled over his head.

Newton appeared downcast and spoke few words as he peered from underneath the hoodie while the voices of Broncos players talking exuberantly about the victory reverberated from the adjacent interview area. The moment was reminiscent of the first two years of Newton's career, when he was criticized for wearing a towel over his head on the sideline and sulking during losses.

Asked to put his disappointment into words, Newton delivered his longest answer.

"They just played better than us," he said. "I don't know what you want me to say. They made more plays than us, and that's what it came down to. We had opportunities. There wasn't nothing special that they did. We dropped balls, we turned the ball over, gave up sacks, threw errant passes. That's it. They scored more points than us."

Newton had nothing to be excited about after Super Bowl 50. He had one interception and two fumbles, one of which resulted in a first-quarter touchdown by Denver's defense. He was sacked six times for minus-64 yards. He completed 18 of 41 pass attempts for 265 yards and a season-worst 55.4 passer rating.

Asked why the Panthers didn't play like they have all season, when they led the league in scoring (31.2 PPG), he said. "They outplayed us."

Asked if he could put his disappointment into words, he said, "We lost."

Asked what coach Ron Rivera told players in the locker room, he said, "He told us a lot of things."

All this came after Newton's mother, Jackie, sent her son a heartfelt text message, which the Pro Bowl quarterback posted on Instagram prior to the game.

In the message, Jackie wrote: "I understand that hot and cold water comes out of different fountains. You are neither hot or cold. You have a big platform. Which fountain are you? Don't let the devil win over your words or speech that represents the dark world. But represent the awesome God you serve through your words. ... You win with your character and powerful words you speak.''

After the game, wide receiver Jerricho Cotchery tried to put into words how his quarterback felt.

"He's just hurting, man," said Cotchery, who dropped two passes Sunday after having none all season. "He put in a lot of work ... had a heckuva year."

Cotchery declined to speculate on whether Newton's postgame behavior would evoke past criticisms.

"We all have areas where we can grow," he said. "He has a family and friends that will talk to him and say to him whatever they need to say to him."

Broncos defensive back Chris Harris, whose voice could be heard during Newton's news conference, said in an interview with NFL Live that will air at 3 p.m. ET, said, "I have no idea why they had us in the same room or anywhere close to us so I would have been mad too if I was Cam... to be able to hear your opponent right behind you talking, nobody wants to hear that .

"I think that was a bad set up but things happen," Harris said. "But you gotta deal with it and approach things like a man. We've been in that situation where we lost a Super Bowl... I'm just happy we were on the good side of things this time."

Harris was in an adjacent interview area talking loudly about the Broncos' game plan in their 24-10 victory at Levi's Stadium.

His voice could be heard above everyone else's from the Carolina interview area, which was separated from the Broncos' area by a black curtain. Some are wondering if what he said had anything to do with Newton abruptly walking away from reporters.

"Load the box, force y'all to throw the ball. Can you throw the football? That was the game plan," Harris said.

Newton was looking in that direction and appeared to be listening intently to Harris. The newly crowned league MVP finally shook his head as Harris spoke and then walked off.

Whether Harris' comments pushed Newton into leaving, only the quarterback can say.

Rivera said he spoke briefly to Newton after the game.

"This is one of those things that's going to hurt," he said. "It's going to hurt everybody for a while. Hopefully, after a few days or whatever it is, we're going to get over it, and we'll move forward."

Newton's most poignant moment, other than abruptly walking away, came when he was asked if he had a message for Carolina supporters. 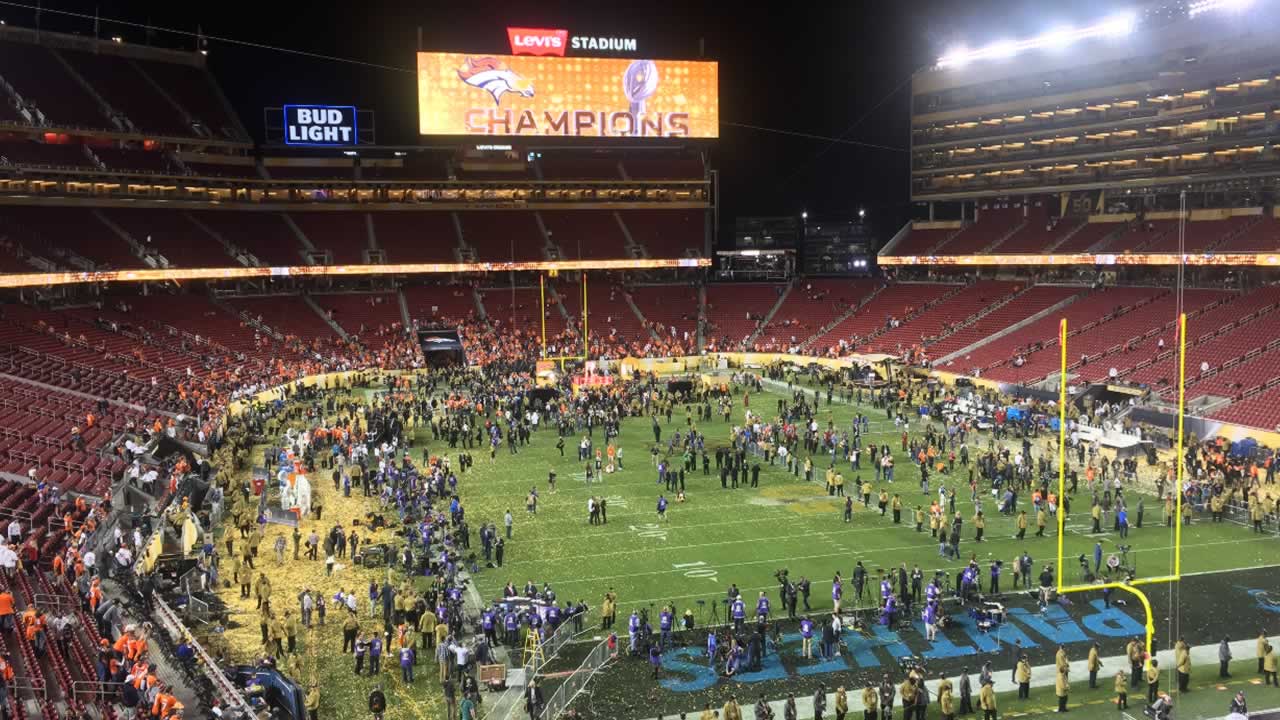 PHOTOS: Super Bowl 50 postgame celebration
The Denver Broncos defense dominated Cam Newton and the Carolina Panthers, leading to a 24-10 victory for the team in Super Bowl 50 at Levi's Stadium.

Cleveland Cavaliers forward LeBron James was asked Monday morning about Newton's news conference. James said he didn't see it, but he added, "I know it's very difficult to play in one of the biggest games of your life and come out on the wrong side of it and then have to automatically answer questions. And we also know as professionals that's part of the business.

"We also know that you guys are part of the reason that help the game be as great as it is, so you gotta, as difficult as it is to answer some of the questions that you know this is the last thing you want to talk about, you have to go up there and take the onus, and take the good with the bad. Like I said, I didn't see the Cam interview, but I can only imagine what happened. But I've been in that situation before on both sides, so it's difficult."