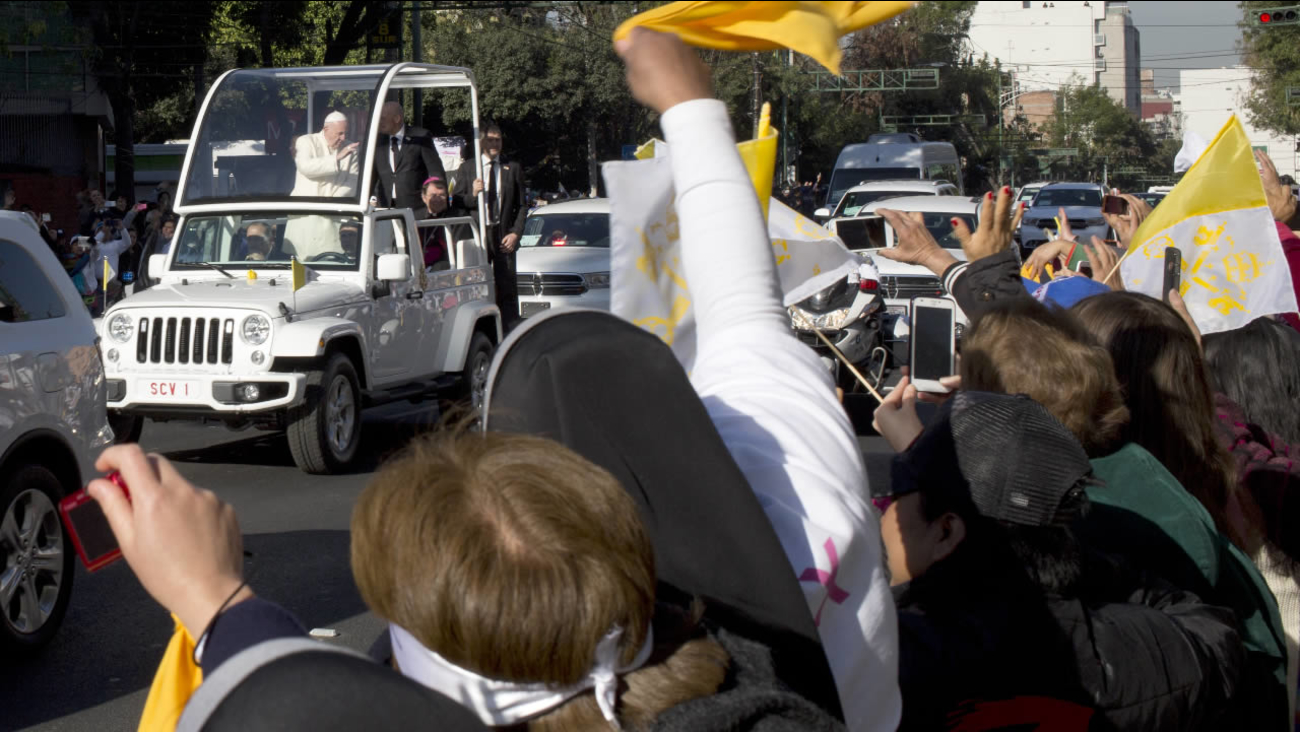 Nuns and faithful wave to Pope Francis as he makes his way on the popemobile to Mexico City's main square, the Zocalo, Saturday, Feb. 13, 2016. (AP Photo/Enric Marti)

MEXICO CITY -- Pope Francis kicked off his first day in Mexico with a long popemobile ride past adoring crowds, launching into a day that starts with tough-love speeches to the country's political and church elite and ends with a silent prayer before the Virgin of Guadalupe at the largest and most important Marian shrine in the world.

Cheers erupted as Francis' popemobile pulled out of the residence where he was staying, and he abruptly stopped to greet elderly, sick and disabled people who had gathered outside. He handed out rosaries to the faithful in wheelchairs and embraced a young boy wearing a surgical mask.

Tens of thousands more, bundled against the morning chill, lined his 14-kilometer (8.7-mile) motorcade route to the city's colonial heart as history's first Latin American pope basked in the welcome from the largest Spanish-speaking Catholic country in the world.

President Enrique Pena Nieto, suffering the lowest approval ratings of a Mexican leader in a quarter century, and his wife met Francis outside the presidential palace. After a brief welcome ceremony, the two men went into private talks.

As he flew toward Mexico City, Francis said his "most intimate desire" is to pray before the dark-skinned Madonna. She is the patron saint of Mexico and "empress of the Americas," and millions of pilgrims flock each year to pray before the cloak that bears her image.

Along the route to his residence, people chanted in rhyming Spanish: "You see him, you feel him, the pope is present!" and "Francis, friend, the whole world loves you!"

Tania Vasquez came with her 6-year-old son, Carlos, and other relatives. She held a pennant with the colors of the Mexican flag and images of Francis, a dove and the Virgin of Guadalupe.

"He's coming to talk tough to us," Vasquez said. "In Mexico there are a lot of economic and security problems, there is a lot of egoism, and he comes with a message of peace and hope that we need."

At one point the motorcade paused when a man ran toward the popemobile, but he was detained by security officers before reaching it and the convoy moved on.

As the pope passed her, Mariana Dieguez was moved to tears and had difficulty speaking.

"I feel like my heart could jump from my chest. He comes to give us peace because we are living a difficult moment," she said, alluding to a month-old grandson who was born ill.

On Saturday, Francis meets with Mexican officials and foreign ambassadors at the National Palace. The speech, which is a fixture of every papal trip, is usually the pope's most political message, and Francis is expected to touch on some of the grave problems facing Mexico stemming from drug violence, migration and poverty.

The pope also will speak to Mexico's bishops at the Cathedral of the Assumption. He is expected to urge them to be close to their people and accompany them through their hardships, amid criticism even from within the Mexican clergy that many in the church here are often highly deferential to the wealthy and powerful.

Francis wraps up his day with a Mass at the Basilica of the Virgin of Guadalupe and a silent prayer before the icon.

According to tradition, the Virgin appeared before the Indian peasant Juan Diego in 1531 at Tepeyac, a hillside near Mexico City where Aztecs worshipped a mother-goddess, and her image was miraculously imprinted on his cloak.

The image helped priests inculcate Catholicism among indigenous Mexicans during Spanish colonial rule, and the church later made her patron of all the Americas. Juan Diego was canonized as the hemisphere's first Indian saint in 2002 during the papacy of John Paul II.

The Mexico trip follows a brief but historic meeting in Havana on Friday, when Francis embraced Russian Orthodox Patriarch Kirill and with an exclamation of "finally," took a momentous step toward closing a nearly 1,000-year schism in Christianity.

The two religious leaders signed a 30-point joint declaration of religious unity that committed their churches to overcoming their differences. Francis tweeted that the meeting was a "gift from God."

Francis and Kirill also called for political leaders to act on the single most important issue of shared concern between the Catholic and Orthodox churches today: the plight of Christians in Iraq and Syria who are being killed and driven from their homes by the Islamic State group.

Later aboard his plane, Francis said the declaration was not a political statement, but rather a pastoral one. It came from "two bishops who met and discussed their pastoral concerns," he said.