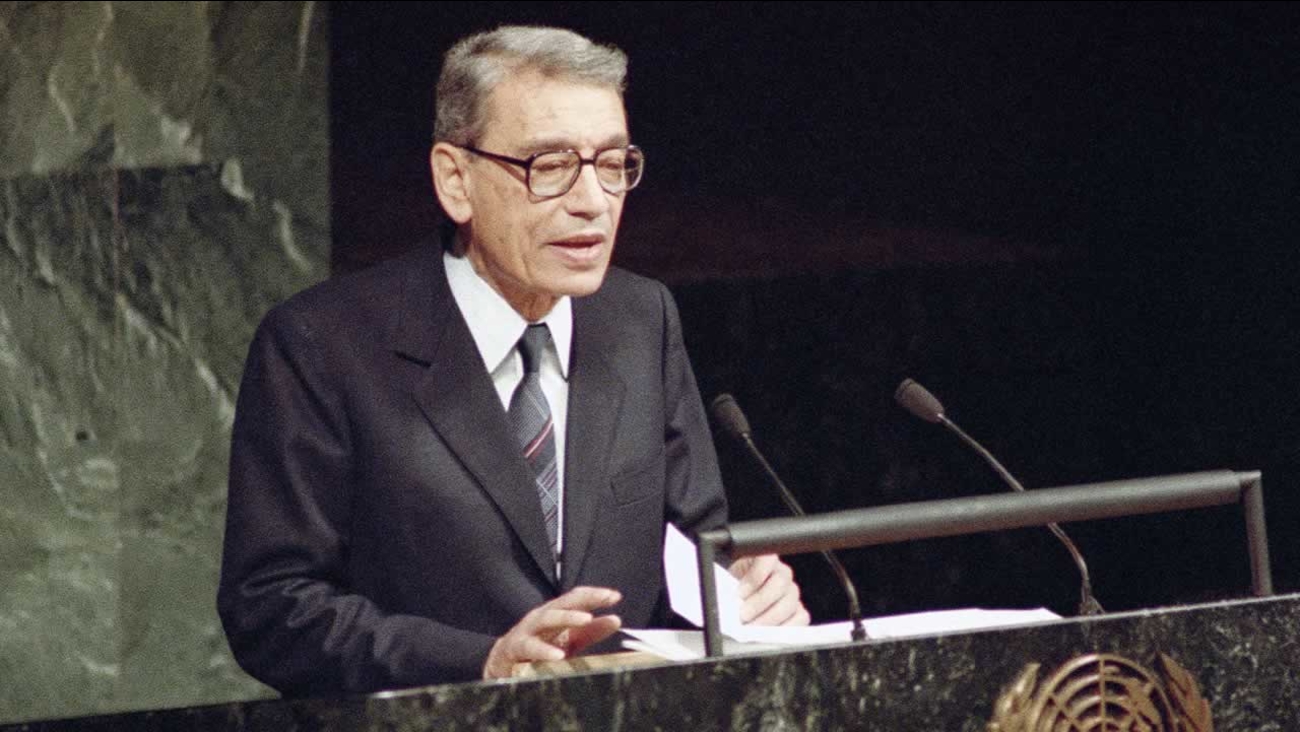 Boutros Boutros-Ghali addresses the United Nations General Assembly after being sworn in as the new U.S. Secretary-General in United Nations on Tuesday, Dec. 3, 1991. (AP Photo/Marty Lederhandler)

UNITED NATIONS -- Boutros Boutros-Ghali, a veteran Egyptian diplomat who helped negotiate his country's landmark peace deal with Israel but then clashed with the United States when he served a single term as U.N. secretary-general, died Tuesday. He was 93.

Boutros-Ghali, the scion of a prominent Egyptian Christian political family, was the first U.N. chief from the African continent. He stepped into the post in 1992 at a time of dramatic world changes, with the collapse of the Soviet Union, the end of the Cold War and the beginning of a unipolar era dominated by the United States.

His five years at the helm remain controversial. He worked to establish the U.N.'s independence, particularly from the United States, at a time when the world body was increasingly called on to step into crises with peacekeeping forces, with limited resources. Some blame him for misjudgments in the failures to prevent genocides in Africa and the Balkans and mismanagement of reform in the world body.

After years of frictions with the Clinton administration, the United States blocked his renewal in the post in 1996, making him the only U.N. secretary-general to serve a single term. He was replaced by Ghanaian Kofi Annan.

In a U.N. Security Council session Tuesday, the 15 members held a moment of silence upon news of his death Tuesday in a hospital in the Egyptian capital. He had been admitted after suffering a broken pelvis, Egypt's Al-Ahram newspaper reported last week.

"The mark he has left on the organization is indelible," Secretary-General Ban Ki-moon said. He said Boutros-Ghali "brought formidable experience and intellectual power to the task of piloting the United Nations through one of the most tumultuous periods in its history."

Ban pointed to Boutros-Ghali's landmark 1992 report "An Agenda for Peace," a proposal for how the U.N. could respond to and prevent conflict. Many of his proposals are still used by the United Nations.

In his farewell speech to the U.N., Boutros-Ghali said he had thought when he took the post that the time was right for the United Nations to play an effective role in a world no longer divided into warring Cold War camps.

"But the middle years of this half decade were deeply troubled," he said. "Disillusion set in."

In a 2005 interview with The Associated Press, Boutros-Ghali called the 1994 massacre in Rwanda - in which half a million Tutsis and moderate Hutus were killed in 100 days - "my worst failure at the United Nations."

But he blamed the United States, Britain, France and Belgium for paralyzing action by setting impossible conditions for intervention. Then-U.S. President Bill Clinton and other world leaders were opposed to taking strong action to beef up U.N. peacekeepers in the tiny Central African nation or intervening to stop the massacres.

"The concept of peacekeeping was turned on its head and worsened by the serious gap between mandates and resources," he told AP.

The Bosnian War also brought the same contentious mix of issues: U.N. peacekeeping, world powers' intervention and limits, and the need to protect civilians from atrocities. During a December 1992 visit to Bosnia's capital Sarajevo, under a brutal Serbian siege, he insisted to angry local journalists that upcoming peace talks were the solution and told them he knew of at least 10 places where conditions were far worse than Sarajevo - the sort of answer that deepened his reputation for arrogance.

He and the U.N. came under further fire after Serb forces massacred 8,000 Muslims in July 1995 in Srebrenica under the eyes of a U.N. force that was supposed to be enforcing a safe zone.

His legacy was also stained by investigations into corruption in the U.N. oil-for-food program for Iraq, which he played a large role in creating. Three suspects in the probe were linked to him either by family relationship or friendship.

Boutros-Ghali frequently took vocal stances that angered the Clinton administration - such as his strong criticism of Israel after the 1996 shelling of U.N. camp in Lebanon that killed some 100 refugees.

In writings after leaving the U.N., he accused Washington of using the world body for its own political purposes and said U.S. officials often tried to directly control his actions.

He wrote in his 1999 book "Unvanquished" that he "mistakenly assumed that the great powers, especially the United States, also trained their representatives in diplomacy and accepted the value of it. But the Roman Empire had no need for diplomacy. Neither does the United States."

Noted for his dignified bearing and Old World style, Boutros-Ghali was the son of one of Egypt's most important Coptic Christian families. His grandfather, Boutros Ghali Pasha, was Egypt's prime minister from 1908 to 1910.

Born Nov. 14, 1922, Boutros-Ghali studied in Cairo and Paris and became an academic, specialized in international law.

In 1977, then-Egyptian President Anwar Sadat named him minister of state without portfolio, shortly before Sadat's landmark visit to Israel to launch peace negotiations.

Boutros-Ghali played a major role in subsequent negotiations that produced the Camp David peace framework agreements in September 1978 and the Egyptian-Israeli peace treaty in March 1979, the first such between an Arab state and Israel.

President Hosni Mubarak, who succeeded Sadat in October 1981, kept Boutros-Ghali as minister of state but didn't promote him to foreign minister. Putting a Christian to the post was considered too controversial.

After leaving the United Nations, Boutros-Ghali served from 1998 to 2002 as secretary-general of La Francophonie - a grouping of French-speaking nations. In 2004, he was named the president of Egypt's new human rights council, a body created by Mubarak amid U.S. pressure to adopt democratic reforms.

He was married to Lea, an Egyptian Jew. They have no children.