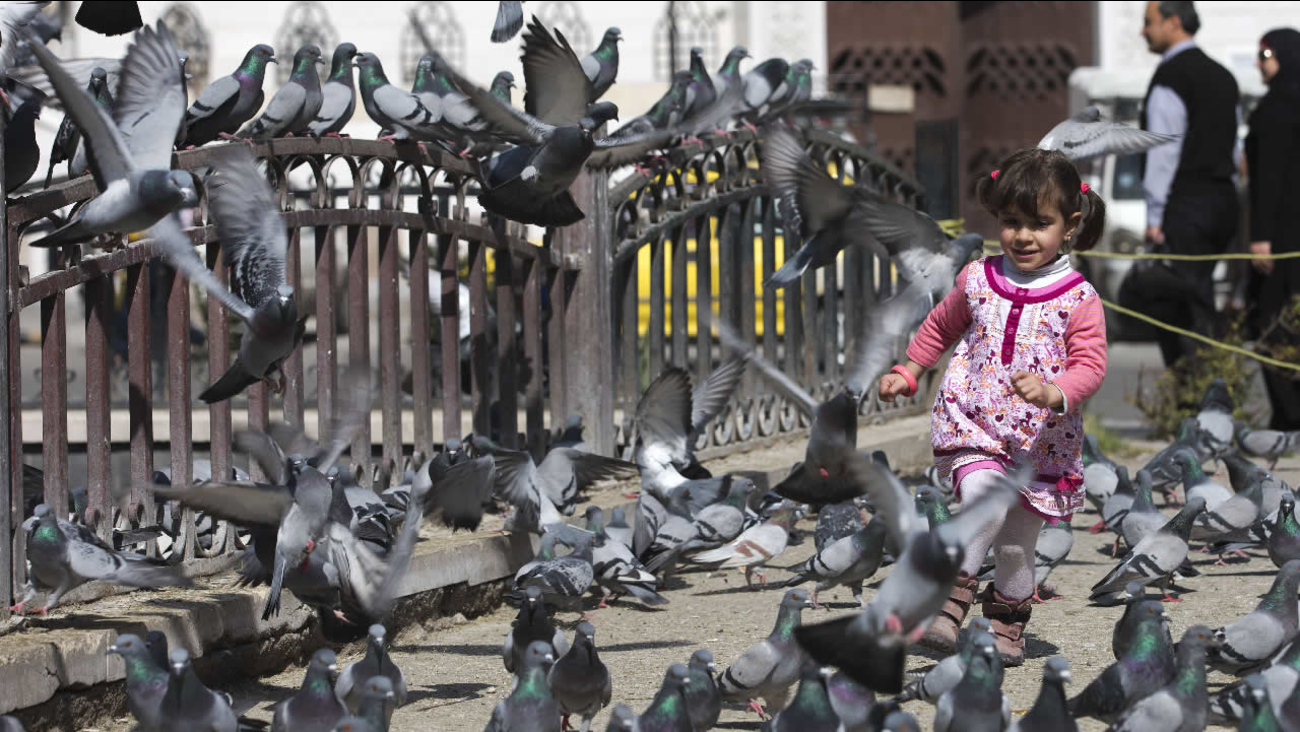 BEIRUT -- A cease-fire brought relative quiet to parts of Syria for the first time in years on Saturday, offering civilians rare respite from Russian and Syrian government airstrikes despite some limited breaches of the agreement brokered by Washington and Moscow.

Fighting continued against the Islamic State group, which launched a surprise offensive on a northern town and carried out a suicide truck bombing in central Syria. The extremist group, along with al-Qaida's branch in Syria, the Nusra Front, is not party to the cease-fire, which went into effect at midnight.

The cease-fire marks the most ambitious international attempt yet to reduce violence in the devastating conflict, which has killed more than 250,000 people, wounded a million and generated one of the worst refugee crises since World War II.

There were numerous violations of the cease-fire Saturday, but the level of violence was markedly down nationwide, giving hope to war-weary civilians across the country.

"Today we woke up and it was calm, stable. And even in the street ... it was complete calm, said Loris Atwah, a 65-year-old resident of Damascus.

"We pray to God that the cease-fire will continue," said Ragheb Bashir Ali, 22.

"The situation yesterday was very bad and fighting was intense," al-Masalmeh said. "Then it was like a football match. People were excited and once the referee blew his whistle all the noise stopped."

The opposition's Syrian Civil Defense, a group of first responders known as the "White Helmets," posted on Twitter: "In comparison with past 4 years, today very quiet and #SyriaCeasefire holding in the main. Long may it last."

Syria's state-run news agency said militants fired several shells on residential areas in the capital in the first breach of the cease-fire around midday Saturday. SANA says the shells were fired by "terrorist groups" entrenched in Jobar and Douma, two opposition-held Damascus suburbs.

It later said one person was killed and another one was wounded by sniper fire on the outskirts of the government-held Sheikh Maksoud neighborhood in Aleppo city.

Rebel groups said they have registered numerous violations by government forces across the country that could threaten the agreement.

Lt. Col. Fares al-Bayoush, commander of the 1,300-strong Fursan al-Haq Brigade, a U.S.-backed rebel faction, told The Associated Press that his group and others affiliated with the mainstream Free Syrian Army are so far abiding by the truce.

"If they continue with these violations we will be forced to retaliate accordingly," he said by phone from southern Turkey. He added, however, that the cease-fire has sharply reduced government attacks across northern Syria, where his group is based.

The U.N. envoy for Syria, Staffan de Mistura said some incidents were to be expected, but that the situation after the first night and day of the cease-fire was "quite reassuring."

A top military official in Moscow said Russia has grounded its warplanes in Syria to help secure the cease-fire.

Lt.-Gen. Sergei Rudskoi said that while Russia will continue airstrikes against IS and the Nusra Front, Moscow is keeping its aircraft on the ground for now "to avoid any possible mistakes."

He said the Russian military had established hotlines to exchange information with the U.S. military in order to help monitor the cease-fire and quickly respond to any conflict situations.

The U.S. has provided the Russian Defense Ministry with similar maps and its own list of opposition units, which have agreed to respect the cease-fire.

Rudskoi said that according to the U.S.-Russian agreements, a rebel unit that accidentally comes under attack should contact Russian or U.S. representatives, who would quickly resolve the matter.

A coordination center at the Hemeimeem air base in Syria's coastal province of Latakia, where Russian warplanes are based, has 61 officers who negotiate with groups willing to join the cease-fire and coordinate the deliveries of humanitarian aid. Rudskoi said 17 opposition units have contacted the Russian military to adhere to the truce.

IS meanwhile launched two suicide attacks near the central town of Salamiyeh, one on an army checkpoint that killed two and wounded four. The second car bomb was destroyed by Syrian troops before reaching a military post, state TV said.

The IS-affiliated Aamaq news agency said IS claimed responsibility for the blasts in the area, where most residents belong to the Ismaili branch of Shiite Islam. The Sunni extremist group views Shiites as heretics.

In the northern province of Raqqa, IS fighters attacked the border town of Tal Abyad and the nearby village of Suluk, which were captured months ago by Kurdish fighters, according to a Syrian rebel official.

Talal Sillo, a spokesman for the predominantly Kurdish Syria Democratic Forces, said the fighting began after midnight Friday and was still ongoing. He and the main Kurdish militia in Syria, the YPG, said some of the IS fighters came from Turkey. The YPG statement said its fighters had killed the attackers after hours of fighting.

The Aamaq news agency reported that IS fighters launched a "surprise attack" on several areas in northern Raqqa province, where Tal Abyad is located. The report did not provide further details.

The Syrian Observatory for Human Rights, an opposition group that monitors the conflict, said at least 70 militants and 20 Kurdish fighters were killed in the clashes. The report could not be independently confirmed.
The Observatory said intense fighting is ongoing near the northern town of Khanaser between pro-government forces and IS. Battles have continued for five days in the strategic area near the highway that links Aleppo with central and western Syria.