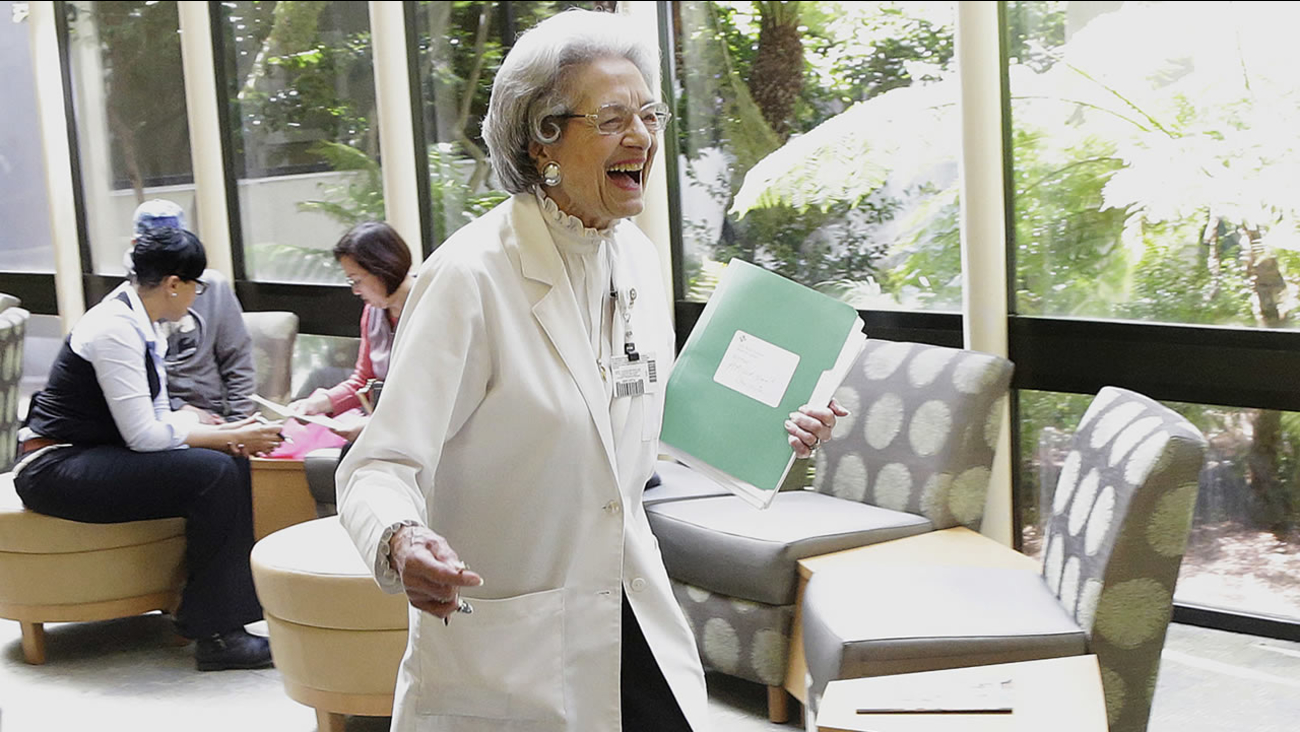 SAN FRANCISCO -- Talk about a loyal employee: Elena Griffing has just celebrated her 70th year working for the same San Francisco Bay Area hospital and she has no plans to retire anytime soon.

Sutter Health Alta Bates Summit Medical Center spokeswoman Carolyn Kemp says the company marked Griffing's milestone employment and her recent 90th birthday. But for Griffing, who has held several different positions in her decades of employment, every day on the job is a celebration.

"I can't wait to come to work every day, this is my hospital," she said. "I enjoy anything I can do to be of service. Truly, it's the patient that counts. If it's helping someone, it's my bag."

As if her employment longevity wasn't enough, consider this: She has taken only four days of sick leave in her 70 years of work.

About 15 years ago she had her appendix removed at the Berkeley facility on a Sunday. On Monday morning, she put on her robe, walked one floor down from her hospital room and got to work.

"It was no big deal," she said. "There was nothing wrong with my hands, I could still type and do what I had to do."

But when the doctor got wind, he sent her home.

Griffing's first day on the job was April 10, 1946, when she was 20. Back then, the facility in Berkeley was called Alta Bates Community Hospital.

She worked there with founder and nurse Alta Alice Miner Bates. In her early years when Bates saw Griffing in the halls of the hospital, she told her to stop wearing her signature 3-inch heels because she might fall and would probably sue the hospital. She has done neither.

"I always got that shaking finger at me, and I was always shaking in my boots when I saw her," she said.

Her first job in the hospital was in the laboratory were frogs and rabbits were injected with a woman's urine to determine if she was pregnant. Griffing was the right hand woman to the pathologist and quickly became an expert at catheterizing frogs. She also worked with an endocrinologist for 10 years and another 22 years in the Alta Bates Burn Center.

She currently works in patient relations four days a week.

"I don't feel any differently than I did when I was 20. I am truly so lucky," she said.

But times have changed since her first day on the job, when the average wage was $2,500 a year and a gallon of gas cost 15 cents.

"When I started here, I thought I was making such a lot of money, but I think I was making about $120 a month," she said. She makes enough money now to live a comfortable life in nearby Orinda, enjoys gardening and jazz and - coming to work. If she has her way, she'll keep working "until they throw me out or they carry me out in a box."