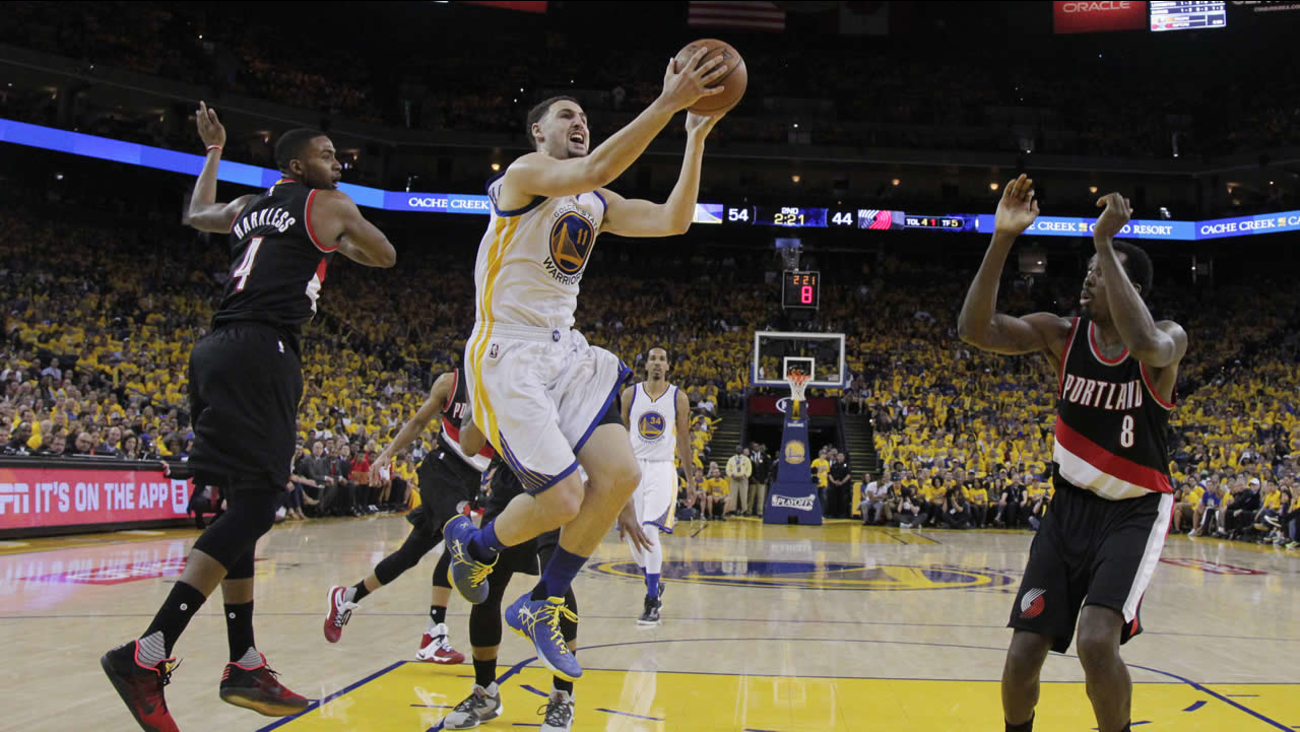 OAKLAND, Calif. -- Klay Thompson scored 37 points in another brilliant performance as fellow "Splash Brother" Stephen Curry watched injured, and the Golden State Warriors again dominated without their MVP to beat the Portland Trail Blazers 118-106 Sunday in the opener of the Western Conference semifinals.

Warriors take on the Trailblazers in Game 2 of second round of NBA Playoffs at Oracle Arena on Tuesday.

Draymond Green had his second career postseason triple-double with 23 points, 13 rebounds and 11 assists for the defending champions.

Golden State reserve Anderson Varejao and Portland's Gerald Henderson were ejected late in the third quarter after receiving their second technical fouls. Both were hit with a technical at the 3:29 mark of the third when Varejao tripped Henderson after they collided and the Portland guard jumped up, pointing a finger at his opponent's face. They kept jawing a few minutes later and were tossed with 15.1 seconds left in the period.

Thompson hit a Curry-esque 30-foot 3-pointer in the opening minutes followed by another jumper to put Golden State up 10-2, and the Warriors ran with it from there. Thompson scored 18 of his points in the first quarter on 7-for-10 shooting with four 3s as Golden State built a 37-17 lead.

Damian Lillard had another slow start back home in the Bay Area, missing 11 of his first 13 shots before finishing with 30 points - 10 on free throws.

Shaun Livingston added 12 points and six assists after scoring 16 in each of his first-round starts in place of Curry.

The MVP injured his MCL when he slipped on a wet spot just before halftime of a Game 4 win at Houston in the first round last Sunday. He said Friday he hoped to do some shooting within a day or two, and that happened Saturday. He still will have to test the knee by putting pressure on it and planting on it when he shoots, then in some 5-on-5 scrimmages.

The Warriors had 38 and 30 assists their previous two games - including six quarters without Curry - by generating the kind of snappy ball movement coach Steve Kerr called for without Curry's playmaking. Then 27 more assists Sunday.

Curry, dressed in a dark blue blazer and black shirt, emerged on the bench midway through the second quarter and received big cheers during a timeout. He was far less animated on purpose after picking up teammate Ian Clark during Wednesday's elimination of the Rockets. His knee told him that was a bad idea, but he did resume light shooting Saturday in hopes of playing Game 3.

The Blazers' two latest visits to Oracle were forgettable. Golden State routed them 128-112 on March 11 to avenge an embarrassing 32-point defeat in Portland last month coming out of the All-Star break. As Lillard scored 51 points, Golden State lost 137-105 at Portland on Feb. 19 - its largest margin of defeat since a 39-point setback to Denver in 2012 - before an impressive seven-game winning streak.

And on April 3, Golden State beat the Blazers here again in lopsided fashion.

On Sunday, Portland looked tired at times after eliminating the injury-plagued Los Angeles Clippers in six games Friday night before traveling to the Bay Area on Saturday.

The Blazers began the game 1 of 9 and missed their initial five 3-point attempts.

With Mason Plumlee going up for a one-handed dunk late in the first quarter, Andrew Bogut blocked the shot, then got a hand up to bother Al-Farouq Aminu's putback attempt. Bogut had another timely block in the second period.

#DubsOn7: #Warriors beat #TrailBlazers 118-106 in Game 1 of 2nd round; Watch 'After the Game' on ABC7 for highlights pic.twitter.com/JDw3wCdzQT

Best and worst cases for the Warriors, Knicks and the teams we haven't seen since March

From rapper to lawyer, David Kelly does it all for Warriors
More Videos
From CNN Newsource affiliates
TOP STORIES
Fire danger: Bay Area braces for strongest winds of season