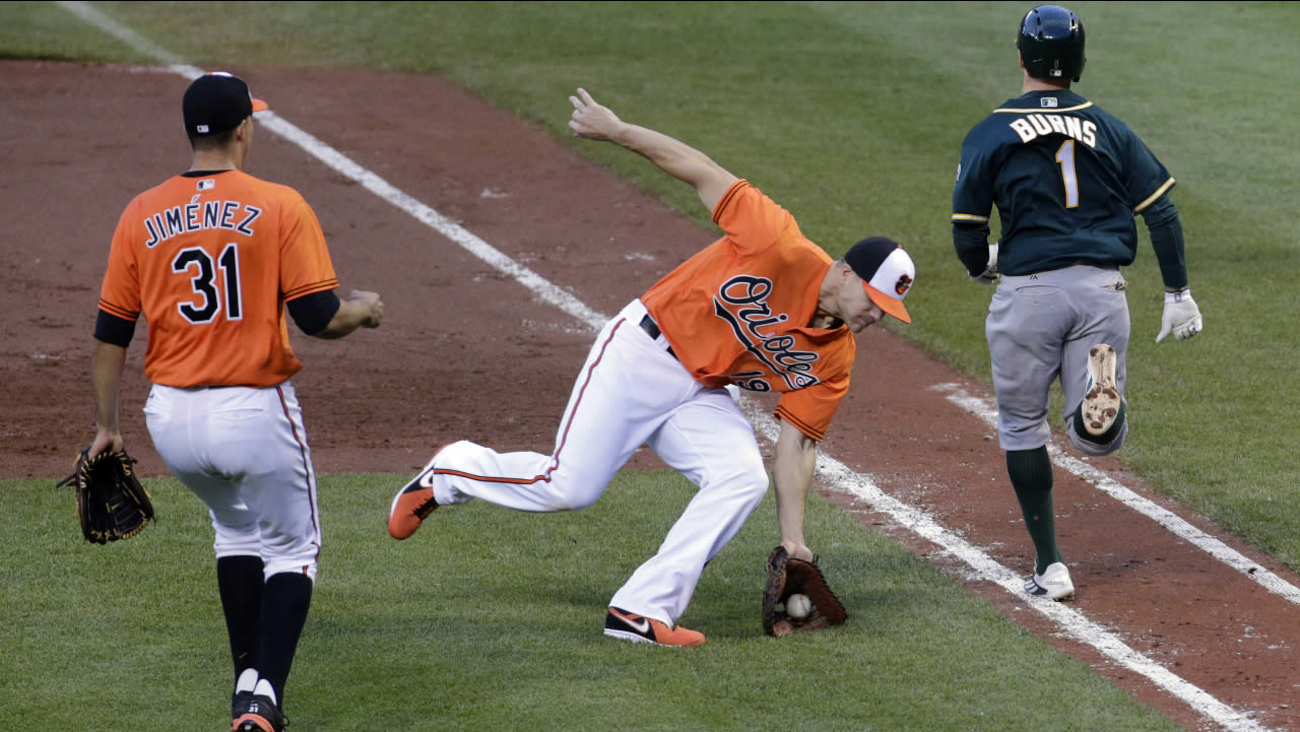 BALTIMORE -- Perhaps the only thing worse than spending 12 hours at the ballpark is absorbing a pair of losses in the process.

So the Baltimore Orioles felt just a little bit better about their very long day at Camden Yards after rebounding against Oakland for a doubleheader split.

In the opener, Marcus Semien homered and drove in three runs to help Oakland stop a four-game skid with an 8-4 victory.

The day-night doubleheader was scheduled after rain washed out the first game of the series Friday night.

"It's early in the season, but you're trying to win that second game because you don't want to go into (Sunday) trying to salvage one game of a three-game set," Orioles manager Buck Showalter said. "Now you have a chance to win the series. It puts a whole different perspective on the long day that we spent here.

"If I had to win only one of the two, I'd want to win the second one."

Naturally, A's manager Bob Melvin had a different take on the nightcap after earning his 900th career managerial victory in the opener.

It was the A's first doubleheader in exactly two years.

In the nightcap, Davis' eighth homer capped a four-run third inning against Jesse Hahn (1-1). It also snapped an 0-for-16 skid.

Winless in his four previous starts, Jimenez (2-3) gave up two runs and nine hits. He finished his outing by striking out the side in the eighth.

Zach Britton got three straight outs for his seventh save.

Josh Reddick had a career-high-tying four hits for Oakland after going 3 for 5 in the first game. The seven-hit day upped his batting average 41 points to .301.

Hahn allowed four earned runs and eight hits over 5 1/3 innings in his second start since being recalled from the minors on April 30.

In the opener, the A's amassed a season-high 15 hits to become the last team in the majors to win in May.

Oakland scored a couple of early runs, led 6-0 in the sixth and cruised behind veteran left-hander Rich Hill.

Hill (4-3) gave up two hits and a run over 5 2/3 innings. Relying heavily on a sweeping curveball, he struck out five and permitted only one runner past first base over the first five innings.

"It was just one of those days where the curveball was working and we were able to spot up some fastballs," said Hill, who is 4-0 with a 1.09 ERA on the road.

Orioles rookie Mike Wright (1-3) yielded five runs and 10 hits in five-plus innings. Several of the hits were opposite-field dribblers against the shift.

Semien put Oakland up with an RBI single in the second inning. Stephen Vogt hit a sacrifice fly in the third, Reddick doubled in a run in the fifth and Jed Lowrie hit a two-run double in the sixth.

Semien, the No. 9 batter in the order, made it 8-1 in the eighth with his team-leading eighth home run.

Athletics: Right-hander Andrew Triggs was added to the roster for the nightcap.

Orioles: Before the first game, Baltimore selected the contract of INF Paul Janish from Triple-A Norfolk and optioned LHP T.J. McFarland to the minors. McFarland was the 26th man for the second game.

Triggs struck out the side in the eighth inning - then started walking toward the wrong dugout.

"I swear I've never done that in my life," said Triggs, who began spring training with the Orioles before the A's selected him off waivers in March. "You get one mulligan I guess."

Athletics: OF Coco Crisp played the first game after being sidelined since Tuesday with a heel injury. He sat out the nightcap.

Orioles: DH Jimmy Paredes (left wrist sprain) went 2 for 3 with a double for Double-A Bowie vs. Erie on Saturday. His rehabilitation stint ends May 15.

Athletics: RHP Kendall Graveman (1-3, 4.40 ERA) starts the series finale Sunday. He is 0-1 with a 7.59 ERA in four career appearances against Baltimore.