2 arrested in connection with string of arson fires in Alameda 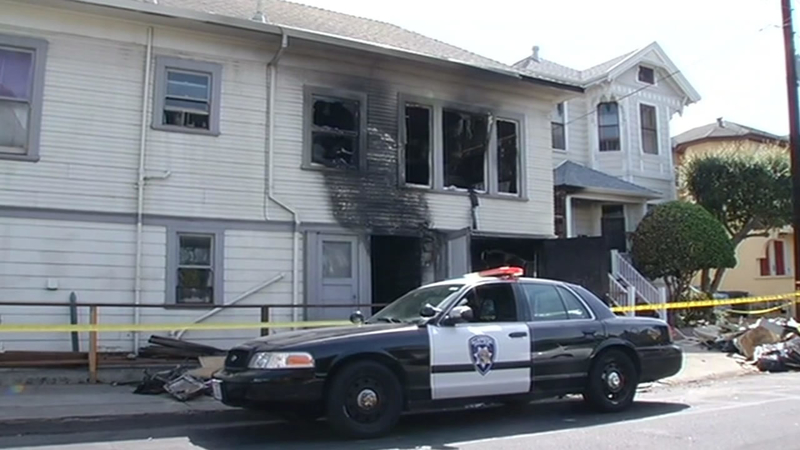 2 arrested in connection with string of arson fires in Alameda

There were no injuries reported, but so many careers and livelyhoods are gone.

Two men are facing arson charges and many want to know why.

Intense flames raced through one of the buildings, gutting the Brite 1-hour Cleaners on Park Street and scorching six delivery vans in front. The dry-cleaning business has been red tagged.

When the sun came up, owner Daniel Ng was in shock everything was gone. "Nothing I can do right now right, that's my life," he said.

Ng and his family have owned the cleaners for 30 years.

Next door, Angela's Restaurant also suffered extensive damage. Restaurant owner Sabbor Zafari was getting set to open in 10 days. "I'm numb. I don't know, there's not much to say. I mean what kind of satisfaction could someone get out of it?" he said.

Police say a total of eight fires were intentionally set between 1 a.m. and 5 a.m., including a fire which engulfed the rear of a home on San Antonio Street, and spreading to the Victorian home next door. Two families were able to get out safely.

Homeowner Bill Rowan told ABC7 News he woke up to people screaming "fire, fire, get out of the building."

The most severe fire occurred when a three-alarm blaze started underneath a car and then spread to a commercial building and affected the five businesses shortly after 4 a.m., authorities said.

Alameda Fire Chief Michael D'Orazi said more than 70 firefighters, including crews from Alameda County and neighboring Oakland and Berkeley helped battle the flames which spread across a seven-block radius.

Police arrested two suspects Sunday morning for setting the fires, but their motive is still unknown.

"I can tell you that they are two adult males. One is a resident of Alameda who is 27 and then the other male is a transient male who frequents Oakland Alameda area," Alameda Lt. Jill Ottaviano said.

The suspect's names have not been released.

The Oakland Fire Department is investigating if the two men are connected to five suspicious fires set early Friday along International Boulevard.

The ATF is now assisting Alameda fire with the case.

Ng doesn't know why he'd be targeted and wants answers. He said he wants the suspects to think about other people and not to be selfish.