KGO
By by Sergio Quintana and Laura Anthony
SAN LEANDRO, Calif. (KGO) -- It's a chase that spanned three counties and lasted more than an hour and a half.

The van was spotted four hours later in the San Francisco's Bayview District near Keith Street and Palou Avenue.

San Francisco police tried to pull over the vehicle but its driver fled, said police spokesman Albie Esparza. That's when the chase began.
VIDEO: Watch the raw video of the chase 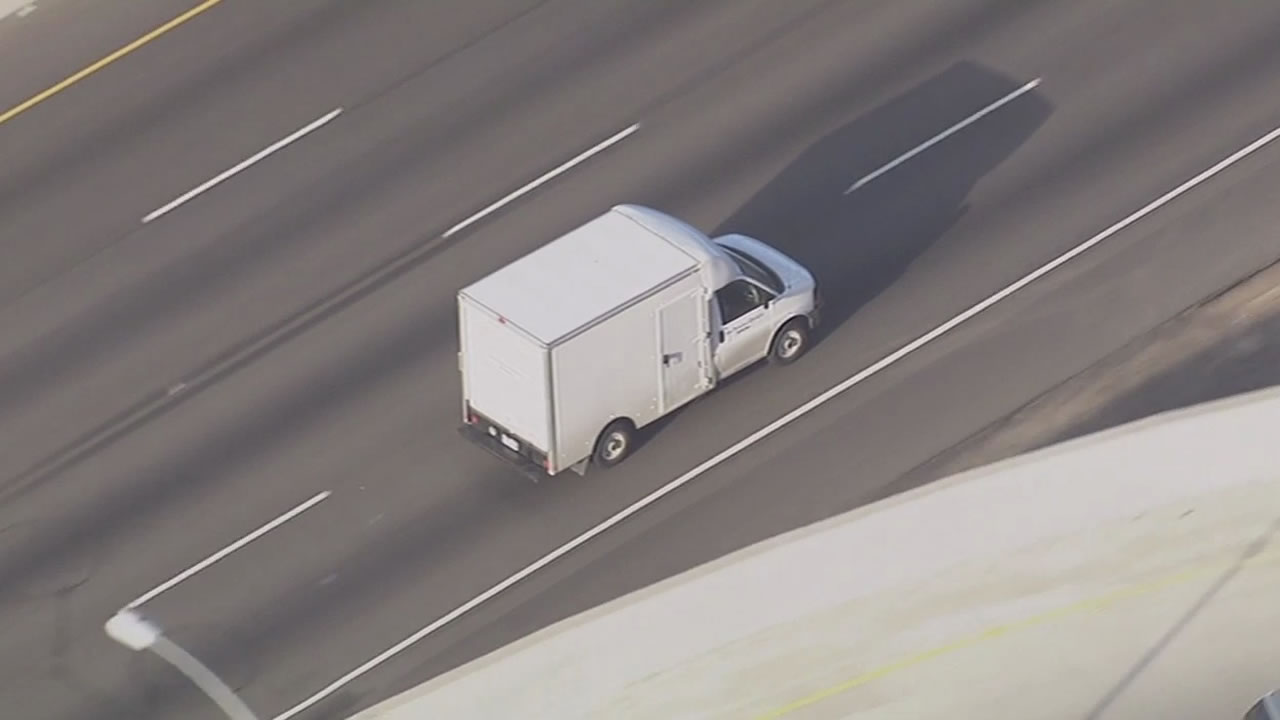 RAW VIDEO: High-speed chase through Bay Area
Police arrested two men in San Leandro suspected of stealing a San Francisco Chronicle van and leading police on a high-speed chase across three Bay Area counties.
They took off going south on down Highway 101 being chased by SFPD. Then they crossed the San Mateo Bridge towards the East Bay. That's when CHP took over.

The driver exited eastbound on Highway 92 in Hayward and sped through city streets before getting on I-880 going north.
PHOTOS: High-speed chase from San Francisco to the East Bay 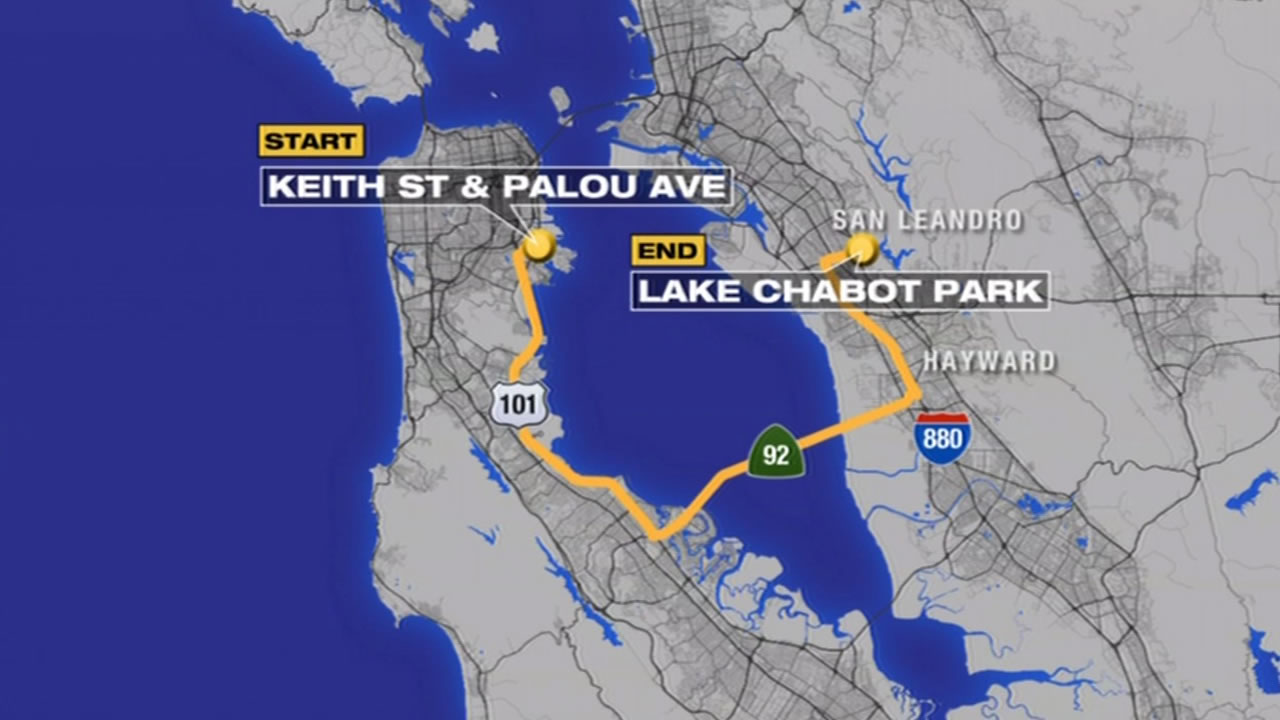 Later, at East 14th Street and Juana Avenue, they stopped and the passenger jumped out. He hopped on a bicycle, pedaling away. But he didn't get far as police eventually arrested him.

Stolen Chronicle van ended up on Chabot Terrace in San Leandro. Driver ran off and was captured in creek. #mapit pic.twitter.com/Gs71yDMATC

The driver eventually drove into a cul de sac, stopped the van and then running off into a wooded area in the upper San Leandro area near Chabot Park.

"He made a U-turn and came roaring across here," said San Leandro resident Bryan Ashton, who heard the roar of the engine, as the white panel truck sped up his street.

The cul de sac the driver of the stolen truck decided to turn on while chased by police. Probably regrets that turn. pic.twitter.com/Rqt2VOM0Dx

The suspect in a blue T-shirt could be seen from SKY7 HD hopping fences through the neighborhood and then down a hillside that leads to Chabot Park.

Police say the suspect ran through San Leandro Creek, trying to hide from police under a bridge, where he was eventually caught.

"At the bottom of the hill, there were a ton of police and they had their weapons drawn, so that was really scary," said Penny Whitworth, who was jogging by.

"This is a very large area, heavily wooded. We were able to get a really tight perimeter at which time we located the suspect inside the creek, inside Chabot Park," Lt. Jeff Tudor with the San Leandro police department.

According to San Leandro police, the suspect in this morning's chase of a stolen SF Chronicle truck is under arrest. pic.twitter.com/W2sdip9I43

Paramedics checked him out before he was driven away in the back of a San Francisco police car back to where it all began.

Alameda County sheriff's deputies and officers from the CHP and the East Bay Regional Park District helped San Leandro officers set up a perimeter and catch the driver.

San Leandro police Lt. Jeff Tudor doesn't know what charges the driver could face but said one is possibly attempting to assault an officer because he swerved the van toward a San Leandro officer during the pursuit. 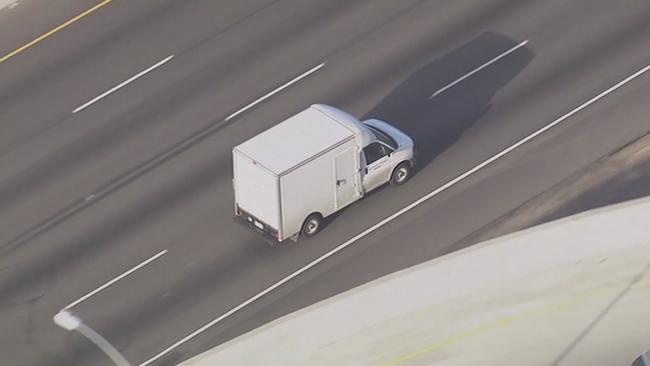 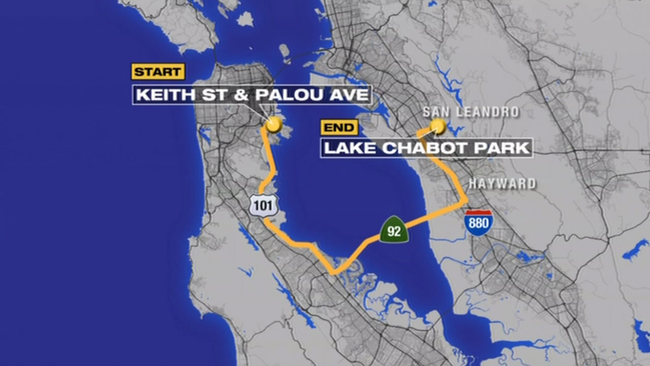