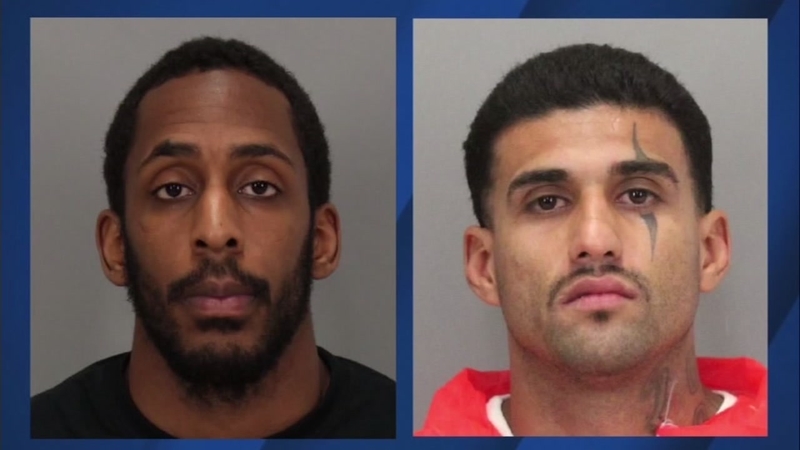 2 inmates who escaped from jail appear in court

SAN JOSE, Calif. -- Two inmates appeared in court today for the first time since they broke out from Santa Clara County jail in San Jose the night before Thanksgiving and stayed on the loose until earlier this week.

Rogelio Chavez, 33, of San Jose, and Laron Campbell, 26, of Palo Alto, stood before Superior Court Judge Allison Danner at the Hall of Justice this afternoon when they were arraigned on additional charges related to the Nov. 23 escape. A third defendant, Karla Fernandez, also showed up in court to be arraigned on a charge of being an accessory to Chavez after he left the jail
and didn't enter a plea. The judge set her bail at $350,000 and scheduled her next court appearance for Dec. 9.

All three defendants stood by a door leading to a holding cell that blocked them from public view.

Both inmates, who remain in custody without bail, were each charged with escaping from a jail and destroying jail property, which could add another 16 months to their estimated 30- to 40-year sentences, Santa Clara County Deputy District Attorney Michael Gadeberg said after today's hearing. Gadeberg acknowledged law enforcement for finding the inmates, who are considered dangerous, in less than a week without harm to the public.

Campbell has been convicted of multiple armed home invasions and will be sentenced Monday, Gadeberg said.

Chavez already has four other felony cases, each involving a firearm, on charges including armed robbery and false imprisonment, according to Gadeberg. The 33-year-old inmate is scheduled to return to court on Dec. 9.

In one of the cases, Chavez is accused of kidnapping his ex-girlfriend, who tried to get away from him by hiding under a bed, Gadeberg said. Chavez allegedly found his ex-girlfriend and shot through a door to the bedroom she was in, then crawled in through a window and took her away, according to Gadeberg.

Chavez and Campbell left the Main Jail South facility on Nov. 23 by sawing through two iron bars and repelling down a window with blankets tied together into a makeshift rope, Gadeberg said. Two other inmates joined the pair in the escape, but were quickly apprehended outside the correctional facility, while Chavez and Campbell were nowhere to be found until earlier this week.

The U.S. Marshals Service served a search warrant for Campbell at his sister's home on James Donlan Boulevard in Antioch around 10 p.m. Tuesday when the fugitive fell down from an attic and crashed to the ground, sheriff's officials said.

Campbell's sister, Marcaysha Alexander, 24, was also arrested for allegedly harboring an inmate and booked into the Elmwood Correctional Facility in Milpitas, according to sheriff's officials.

Chavez was found shortly before 8:30 p.m. Wednesday hidden in an attic at a Coy Drive home in South San Jose during a probation search,

Fernandez was also arrested at the Coy Drive home for allegedly keeping Chavez away from law enforcement authorities, which led to a nearly eight-hour standoff, according to sheriff's officials.

Fernandez faces up to three years in custody if convicted, Gadeberg said.

Chavez was allegedly found with a firearm, crack cocaine and marijuana. He was believed to be under the influence during his arrest, according to Gadeberg.

Emily Vaca, 35, of San Jose, was arrested Monday and arraigned Wednesday for allegedly driving Chavez around the county along with two allegations for past prison time, prosecutors said. She is scheduled to return to court Dec. 9.