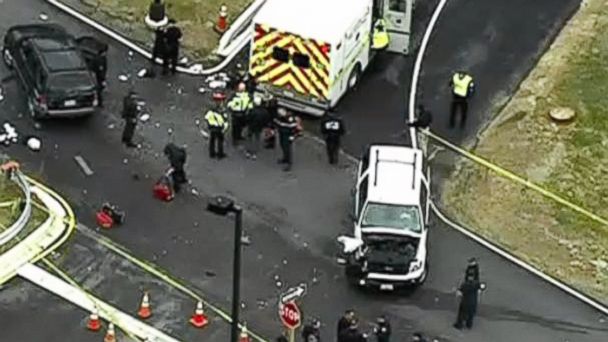 One man is dead and another severely injured after gunfire erupted today at one of the main gates of the National Security Agency located at Fort Meade, Maryland.

The injured man was identified as Kevin Fleming, 20, of Baltimore, according to law enforcement sources. Fleming and another man were in a stolen Ford Escape SUV when they encountered NSA police at the entrance to the Ft. Meade complex, sources said.

Shortly before 9 a.m. ET, a vehicle with two people inside "attempted an unauthorized entry at a National Security Agency gate," according to a statement from the NSA.

"The driver failed to obey an NSA Police officer's routine instructions for safely exiting the secure campus," the statement continued. "The vehicle failed to stop and barriers were deployed."

Sources say the two inside were men dressed as women. Preliminary information indicated the two men were partying at an area hotel with a third individual when they took that individual's car without permission. However, it's still unclear how or why they ended up at the NSA gate.

A law enforcement source confirmed that the car that crashed at NSA was reported stolen in Howard County, Maryland.

When the vehicle "accelerated toward an NSA police car blocking the road" and "refused to stop," an NSA police officer opened fire, and one of the two men inside the "unauthorized vehicle" ended up dead, the NSA statement said. The other man in the vehicle was "severely injured" and taken to a local hospital, according to sources.

An NSA Police officer injured in the incident was also taken to the hospital.

"The incident has been contained and is under investigation," Colonel Brian Foley, Fort Meade garrison commander, said in a statement. "The residents, service members and civilian employees on the installation are safe. We continue to remain vigilant at all of our access control points."

The FBI said they do not believe the incident is related to terrorism.